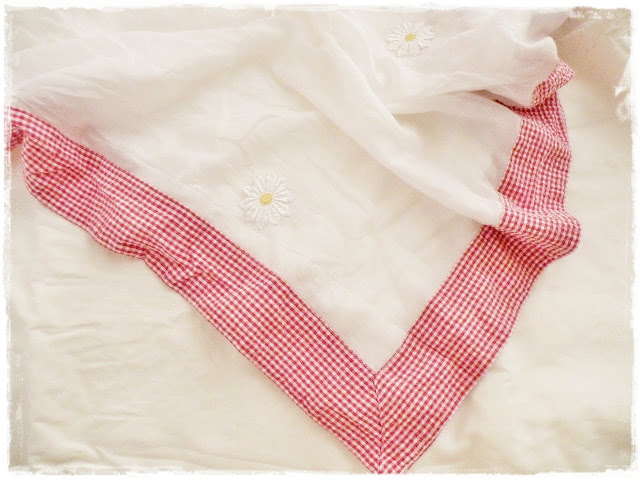 I found lots of fun things while out shopping. The first stop on the post
turkey extravaganza was the Goodwill. Since the whole store was 50% off
we HAD to stop there first. The place was buzzing too. My first treasure
was this pretty tablecloth. It's light as air and has pretty daisies all over, it
only cost $2. 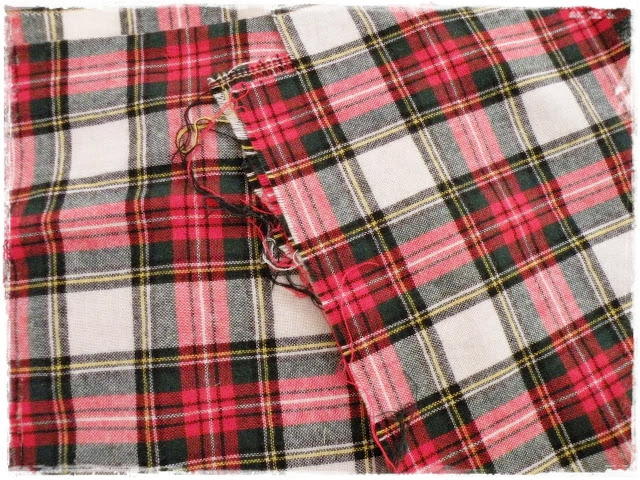 Then I found this rather rustic piece of fabric for $1. I know some of you are
probably thinking it's a wee bit homely, but it will hopefully have new life
as some rustic crafts in the future. I thought Christmas stockings trimmed
with fake fur might be an idea. There is about 2 yards so there is enough to
make something good. 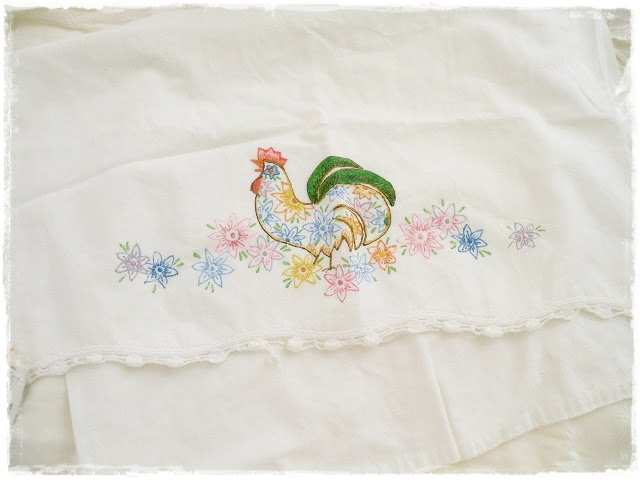 This pillowcase was next on my list for a whole 50 cents. I got it to
match a turkey pillowcase I have. This baby is soft as butter! 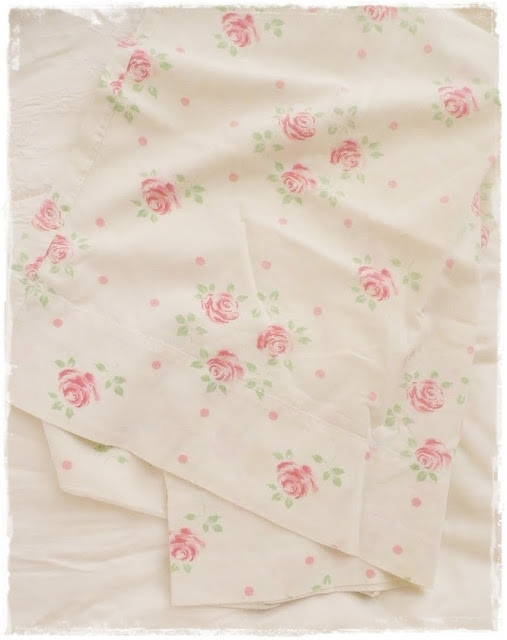 So is this pretty little case covered in roses. The old vintage pillowcases are
my favorite because they're so soft. Okay, it might not really be vintage
but it looks like it is and it was only $1. 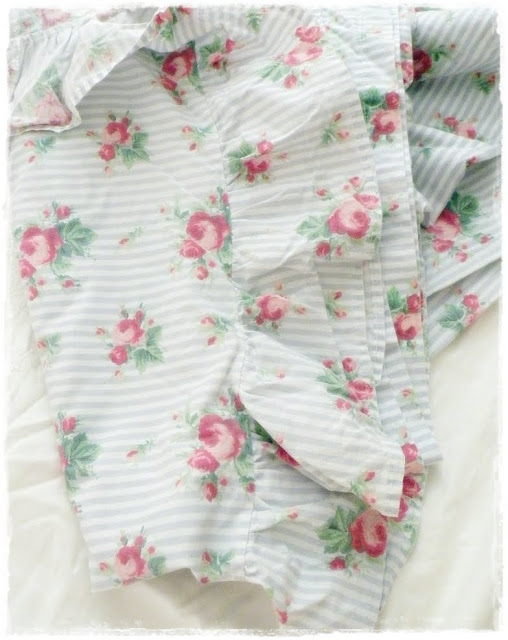 Then I hit a home run with this beauty! A Ralph Lauren flat sheet, just my
size. It was only $2.50 but unfortunately there was no matching fitted
sheet or pillowcases, I looked twice! 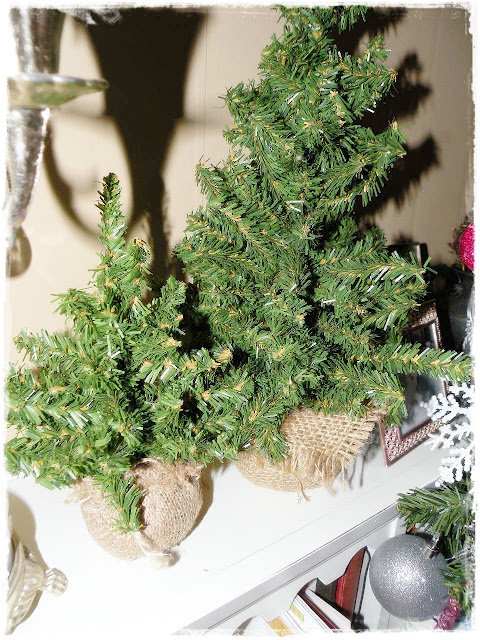 Then I spotted the little green tree on the left (50 cents) to match the
bigger tree on the right I bought a few months ago. What can I say, it was
lonely and needed a friend.

I also bought some water glasses for 35 cents each, and two pairs of
jeans for the Man Cub, not to mention a monster truck shirt which
he loves! By the time I got out of the store I had spent a whopping
$15. 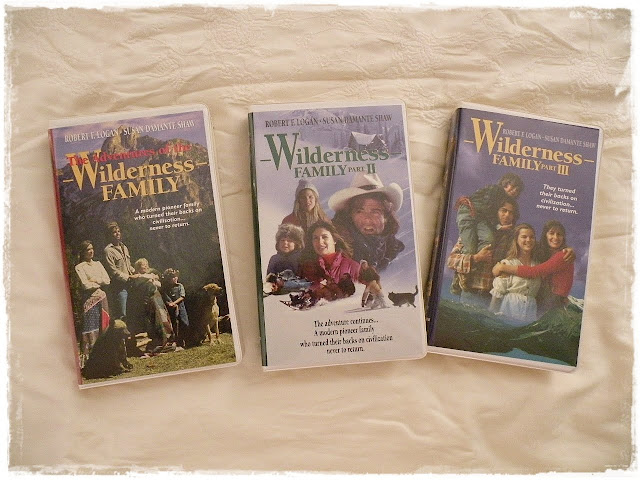 This is a movie series I saw as a child and loved. I thought about it
off and on through the years and lo and behold, what should appear?
The whole series! I was so excited, I've already watched the first two and
they're just as good as I remember. 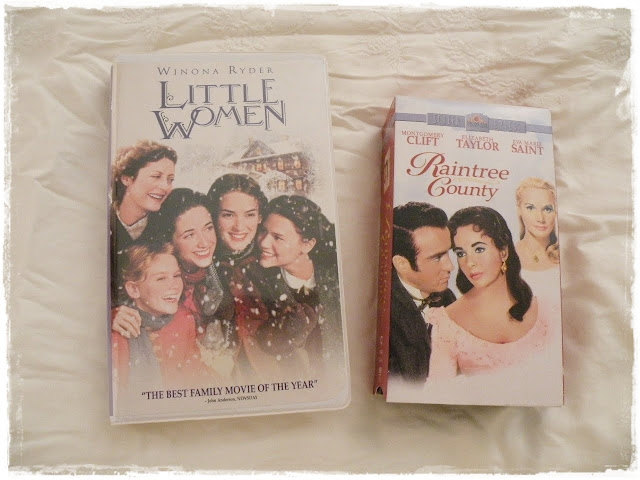 Two more fabulous movies. Little Women is one of my favorites. 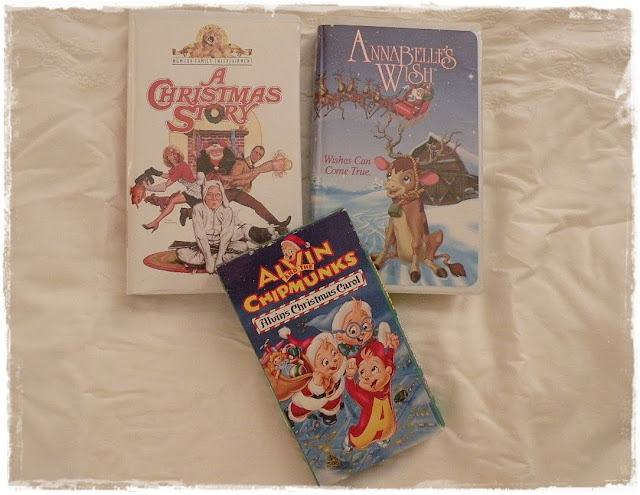 Some Christmas fun for the kiddies, except for A Christmas Story! That
one was really for me, it makes my top 5 favorite Christmas Movie list.
I got all 8 of these movies for $6. I figured it was a bargain even
if the good old VCR becomes obsolete soon, as long as I get to watch
them only a few times. 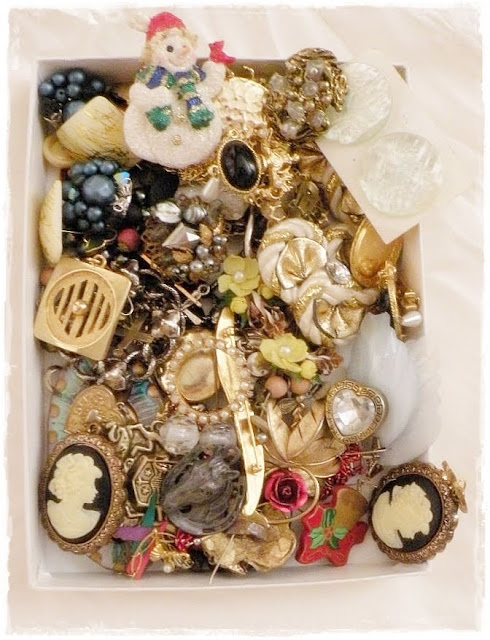 Then for some sparkle. This whole she-bang came home with me for
only $2. Most of it will be reused for crafting. A few pieces
will be headed to the trash, there is no hope for them. 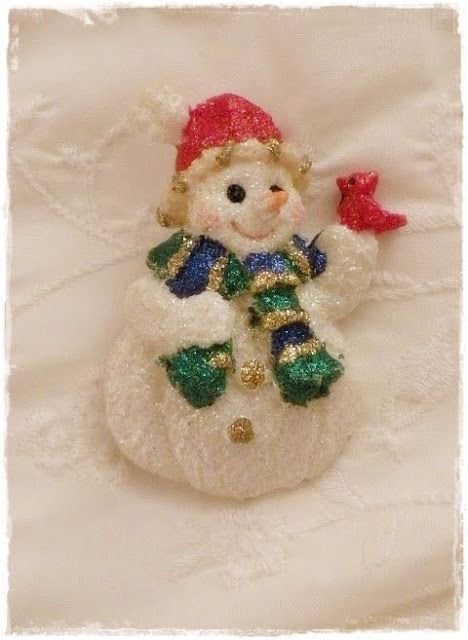 This is the little lady that originally caught my eye, being Christmas
and all! 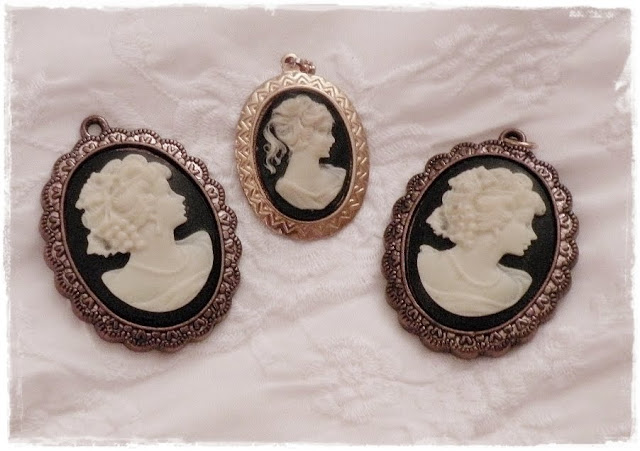 I also spotted these and that tipped the scales! 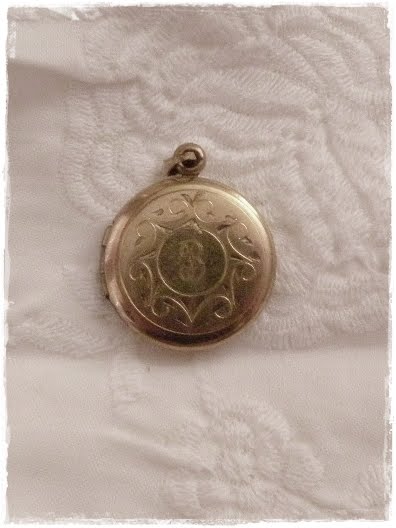 Believe it or not, I didn't discover this pretty locket until today when I
was taking pictures. It has a B on it, which is the first letter of a
couple of family members! 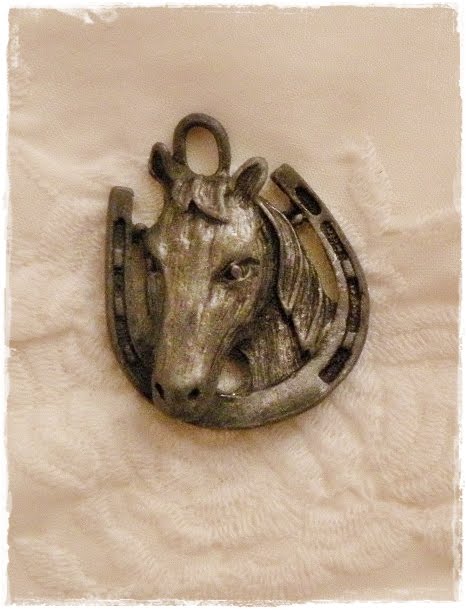 I also just spotted this little pony , which might make a few family
members pea green with envy!

Finally, I hit the NEW shops! 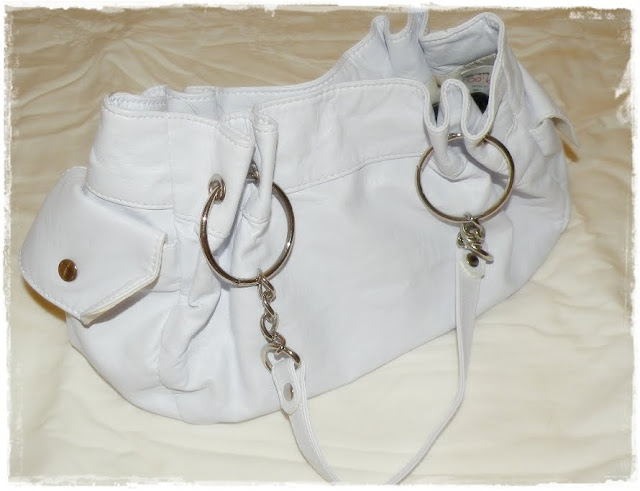 This small handbag was on sale for $2.50. Is that a bargain or what! 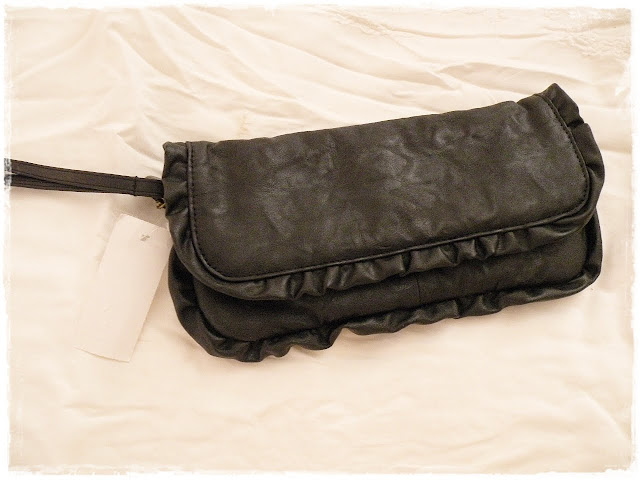 This one was only $2.50 too. The poor little things were in a discount
box, just waiting to find a good home. The saleslady hooked us
up BIG time. 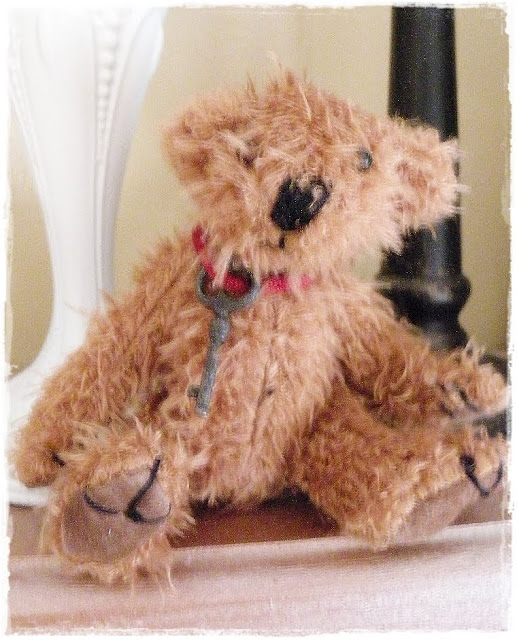 This little bear was just too adorable to resist! 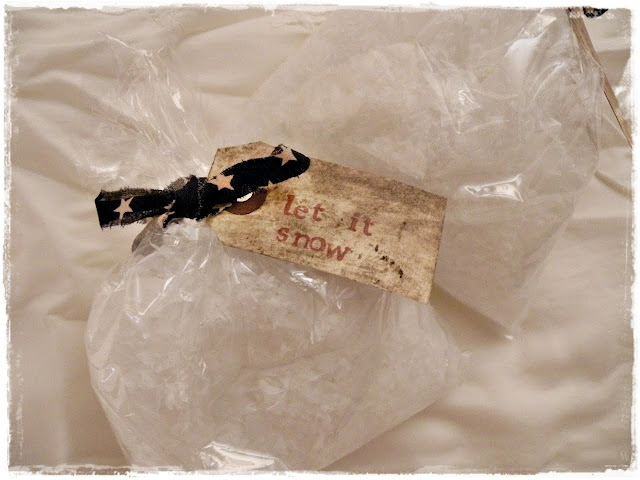 I had to but some snow in a bag too, just in case the real thing
doesn't appear this year. 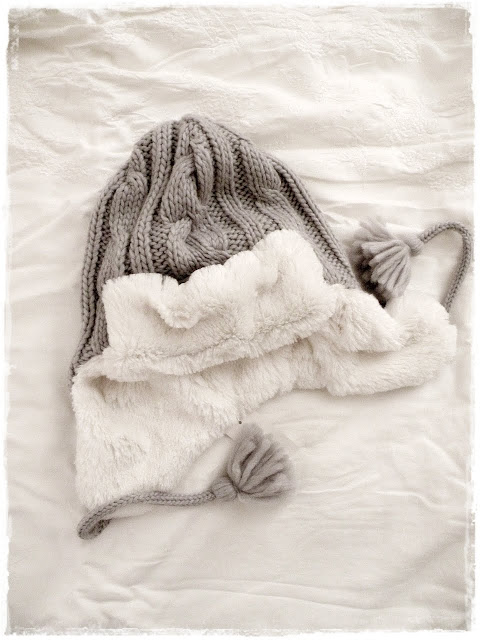 Finally, my most expensive purchase, this cozy hat for those cold winter
walks. My ears ALWAYS get cold! It will come in handy next week when
the temps will dip below freezing.

Thanks for coming along on my shopping spree. Unfortunately none of
this stuff was for Christmas gifts, now I have to get out and do that!

Lovingleigh Created By Tara at 11:15 PM

Hi, Sares,
Gosh you got some great buys!! I love that material and don't think it is homely at all. I am sure your creative mind will make something terrific from it. Those cameos caught my eye right away, so romantic! Enjoy all your goodies! Blessings to you! Vicki

Now...this post is fun! I love all your treasures but MOSTLY I love your spirit. You are the keeper!

What great bargains! You can always use a solid bottom sheet and pillowcases with the Ralph Lauren sheet.

I have that same little burlap tree in my family room, the bigger one :)

Makes me want to go out and bargain shop!

Thank you for showing us your treasures!

Hi Sares! You got good buys and great finds! Love that rooster pillow and the white bag especially. You have a nice week. I probably won't be able to comment cause I am leaving today....Christine

You cleaned up, Sares! Treasure upon treasure, my friend!

Oh I love the hat great purchase in deed I love hats.

The table cloth and the fabric was a steal you can do so much with those colors during the holidays.

I love the ornaments, and great deal on that purse adorable.

Hope you have a wonderful weekend.

Oooo my I love it all!!! You really grabbed some great stuff at unbelievable prices!!

I had some of the little Christmas trees like the smaller one in your picture...I took the burlap off and recovered with something pretty and glued them down into teacups.....so so cute!!!

Wonderful! I loved seeing all you bought. I saw one of those trees with the burlap just yesterday at the thrift store. Now I wish I'd bought it:( I hope you have a wonderful weekend! Twyla

Well, haven't you been having fun, while I've also been having fun (all girls Christmas get together)...great shopping outing you've shared with us Sares.
Now, I really want to see a photo of you in that hat!
Have a wonderful weekend!
Sandi @ Bearly Sane

Wow! You did find some treasures!!!

Wow, what a shopping trip! I'm going for the plaid material and the cameos. Two favorites, and I love your new little hat with ear flaps, so darn cute!!
Debra