A Little Spilled Paint Is Nothing To Cry Over! 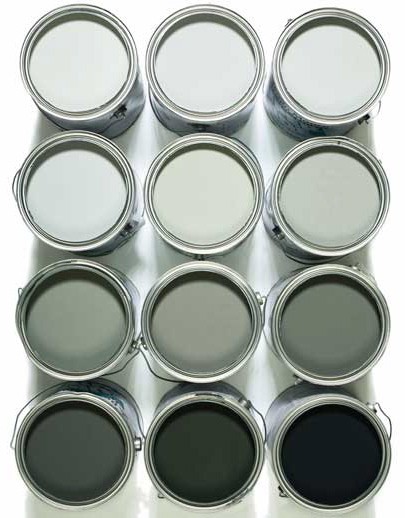 SO. I've been painting furniture to sell now for over 2 1/2 years. In all that time I have managed to avoid spilling a single paint can. I've had the paint brush fly out of my hand a many occasions however.

Then last week, the unthinkable happened. I spilled a quart of paint. Dark paint. In the house. On the carpet. Yep. Good times.

The next day. Spilled another quart of paint. This time outside, thank goodness. A light gray color that isn't so noticeable on the gray concrete. But sheesh, hopefully my clumsiness has run it's course and it will be another 3 years before I do it again! 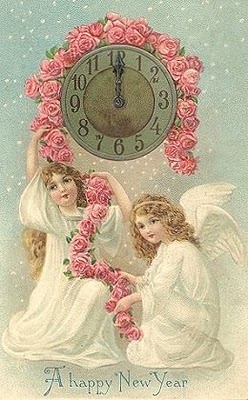 Wishing you all the Happiest New Year EVER!
May 2013 have spectacular things in store for us all! 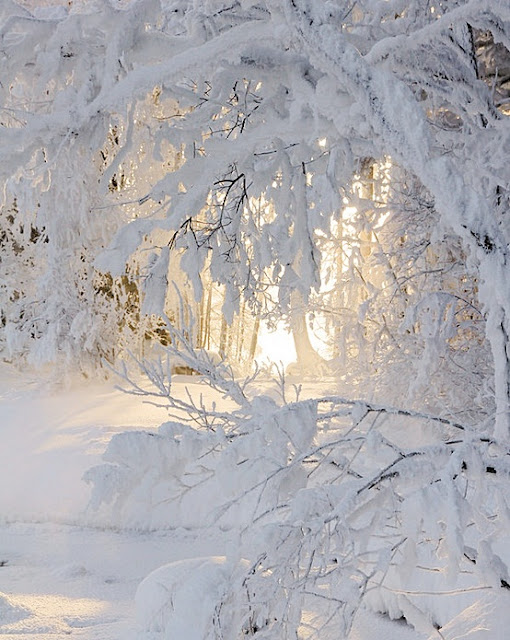 Wishing each and every one of you a Christmas full of blessings.
May your day hold the gifts of love, family, food to fill your belly
and memories to last a lifetime.

Lovingleigh Created By Tara at 1:11 AM 7 comments: 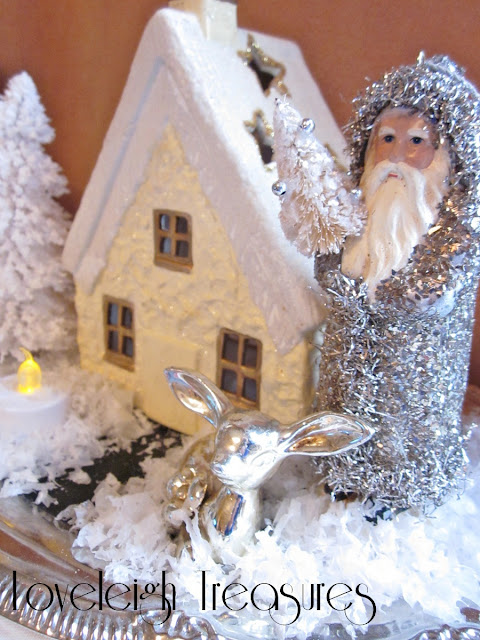 Happy Pink Saturday! Today I'm going to share a few of my favorite Christmas vignettes around the house this year.  I want to move into the little cottage scene I created, watched over by the Papa Noel given to me by my sister last year for Christmas. 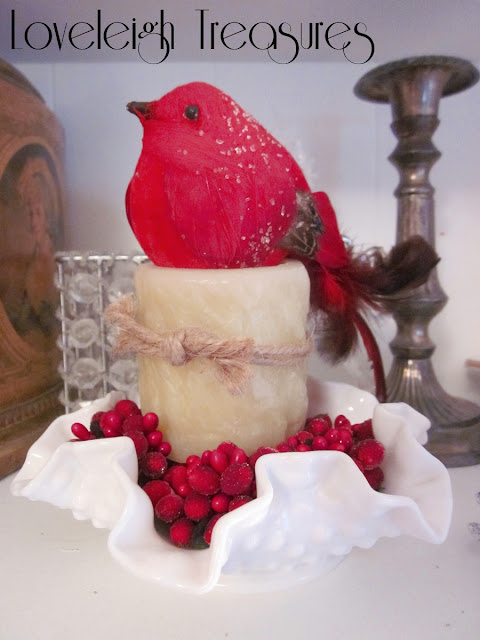 Pretty red bird on his throne.
The little milkglass dish was a gift from a fellow blogger. Martha of Martha's Favorites! 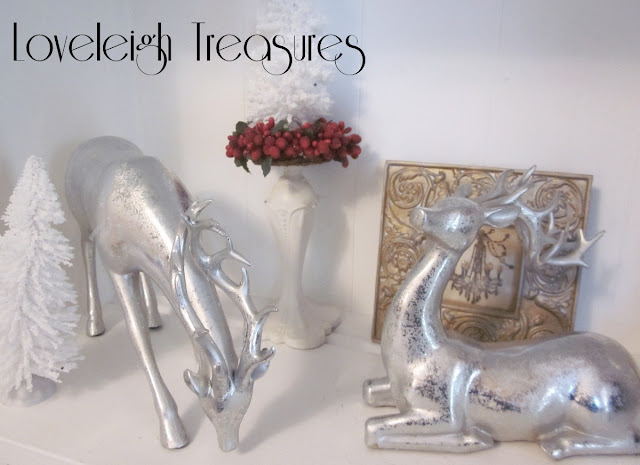 My beautiful set of reindeer, a new Christmas favorite! 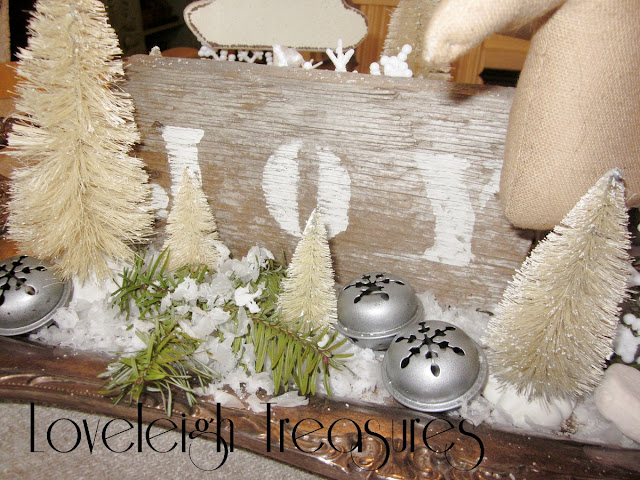 Joy, Joy, Joy to you and yours! 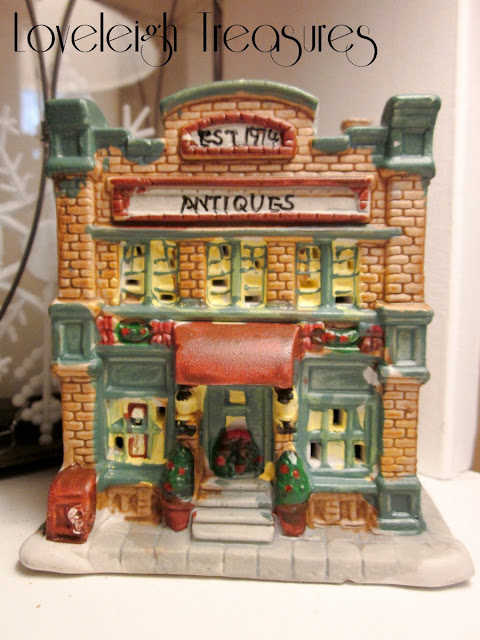 A dollar store find. I just had to have it since I have a space in a antique/vintage store! The year this little shop was established was the year I was born! 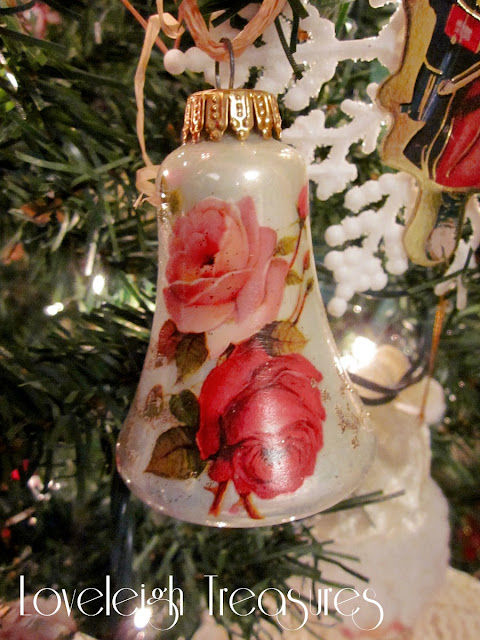 Last but not least, one of a set of 4 glass Christmas ornaments I bought when I was in Jr. High. That means they are about 25 years old and certainly "vintage" but not quite antique! I'm still drawn to things with images of roses on them.

Wishing you all a merry weekend and a bucket full of pink and red delights!
Thank you to Beverly from How Sweet The Sound for hosting Pink Saturday! 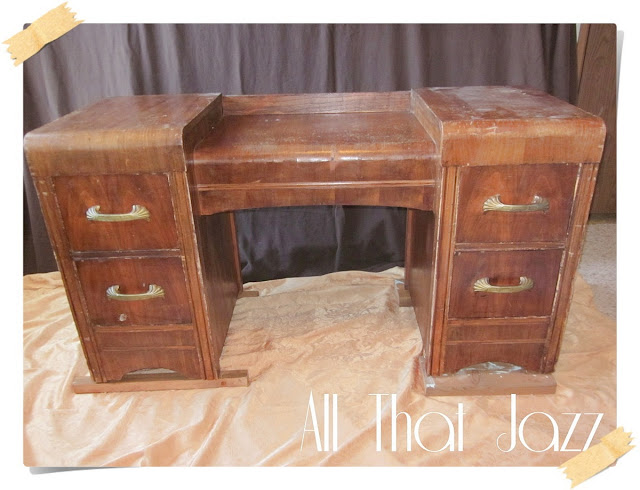 Last week I tackled my first Miss Mustard Seed Milk Paint project.
THIS was my victim. 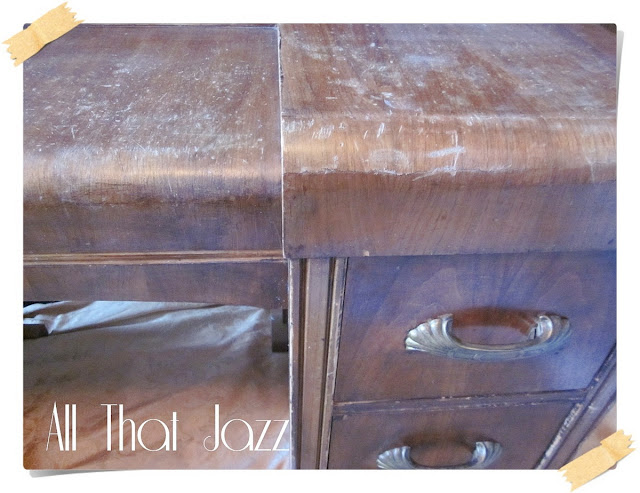 She had a few scratches and dings but was quite sturdy. 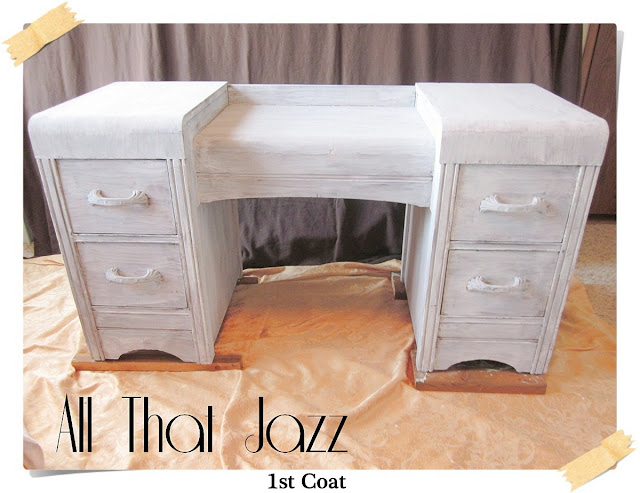 I chose the color Ironstone, After mixing the powdered milk paint with water, I went for it.
I didn't use the binding agent, as I wanted it to chip and flake and generally look well used. 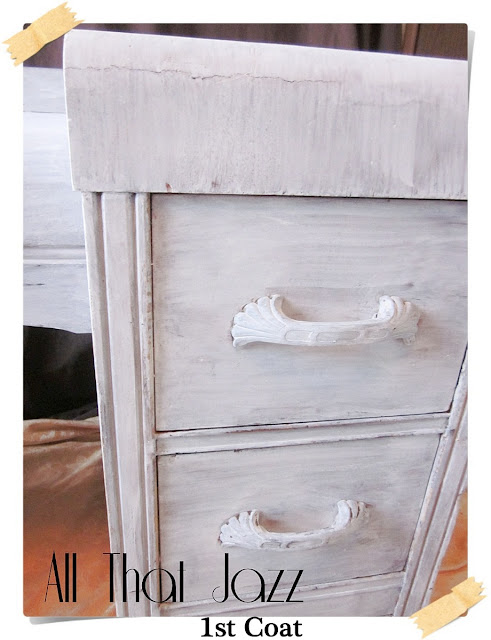 There was no flaking after my first coat, not that your piece won't, this particular one just didn't. 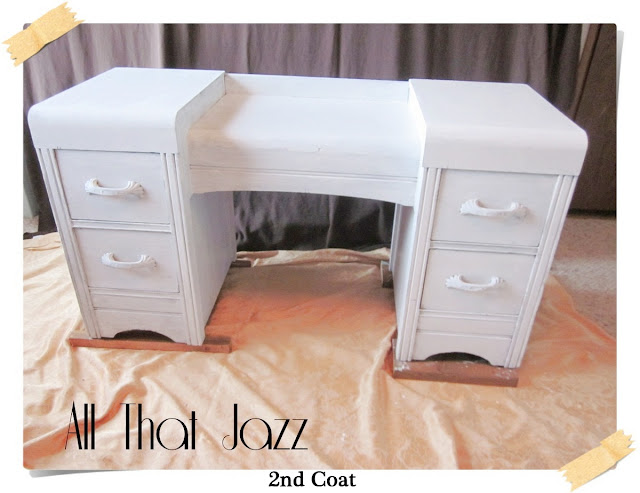 The plan was to add several coats since I wanted it pretty white to contrast with any of the original finish that would show when the flaking happened. 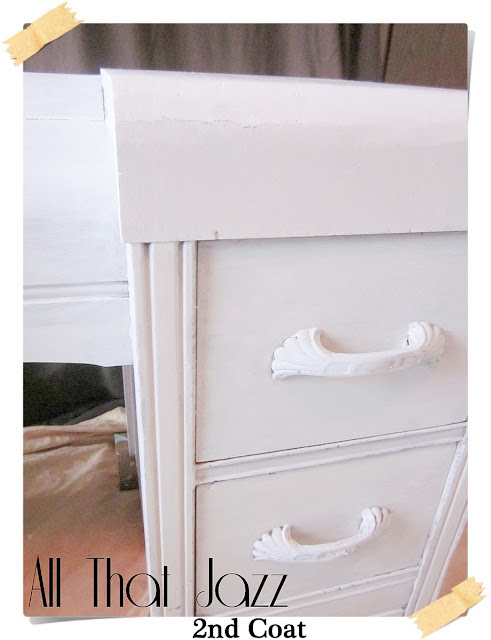 At this point I began to see a bit of flaking on 2 of the drawer handles. 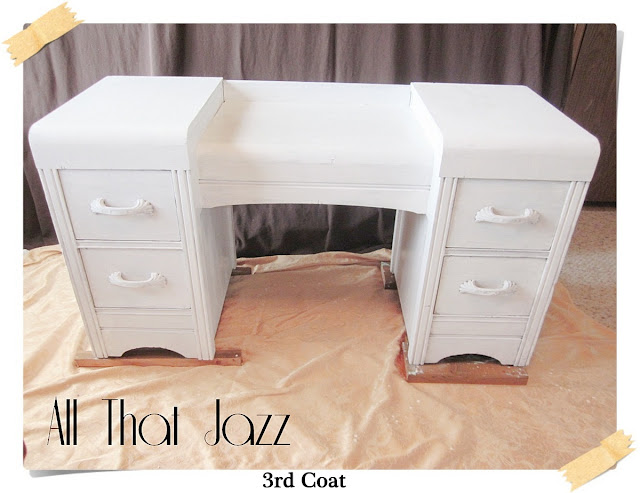 Yep, third coat. I think I had to mix more paint at this point. Since this is the first time I've used this product, learning how much paint to mix for each project will take some time. It might take a few pieces before I get that nailed down. The second time around I got the paint a bit too watery I think and drips were a bit of a problem, so I just kept checking my work for drips. I could have added more paint but I was too lazy and just wanted to get to the flaking part! I also kept stirring the paint to lift any sediments that had sunk to the bottom. Getting all the chunks out was a bit difficult and I think next time I may try shaking it in a container/jar with a lid. A plain spoon wasn't working and the only wire whisk I wanted to use was okay, but not great. I may also look for some small wire whisks for this very purpose. Now the directions tell you to mix for a solid 5 minutes and it could be that I didn't stir long enough. Again, too eager to get to that chipping and flaking part! 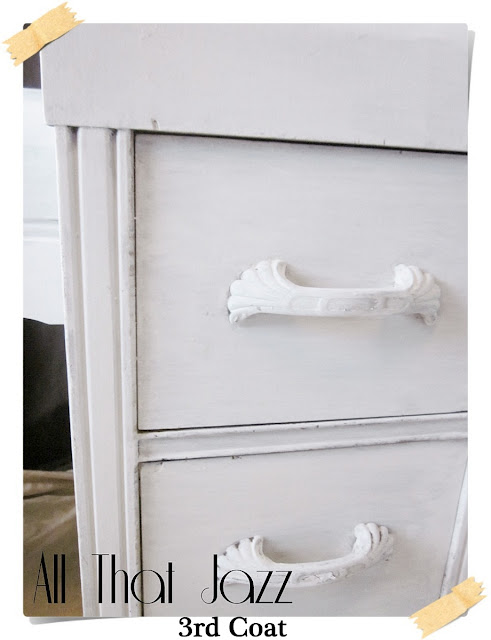 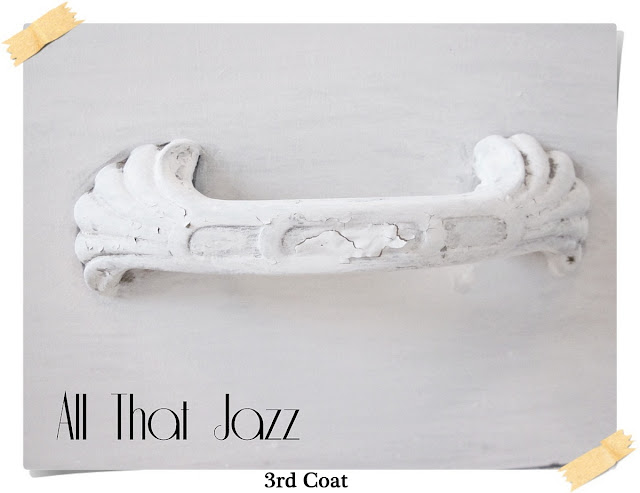 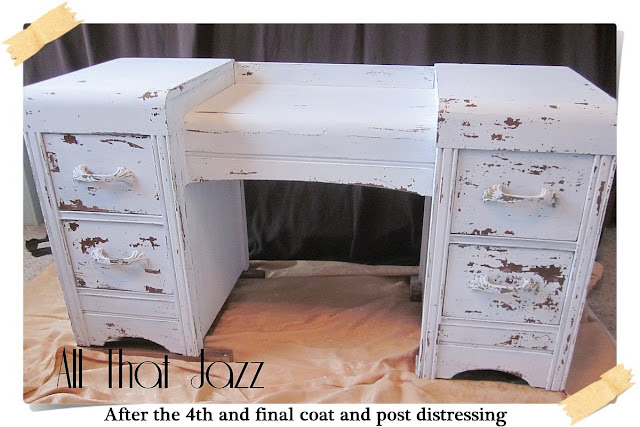 4th and final coat of paint!  The 2 drawers on the right had the most flaking going on and came off in a snap with my putty knife and fine grit sanding sponge. There wasn't much flaking on the rest of the vanity so I had to make my own. That was the fun part! The part I had been waiting for all along!

I let it sit overnight and when I came back, more paint had peeled on it's own so I rubbed it off. Next
I sealed with Miss Mustard Seed's Wax, twice on the top (where the heaviest use would be) and on the handles where there was heavy peeling.

I have to say, I think I am in love with the wax.  It rubs in so smoothly and hardly has any odor whatsoever. I think it's going to be replacing my Annie Sloan Wax. Which is awful convenient since the shop where I have my space now sells The Miss Mustard Seed goodies!

I will tell you that I also used the Crackle Medium and didn't have a lot of luck with it. I had crackled paint in a couple places but not a lot so in the future I plan to experiment to figure out just what I did wrong and how to make it work. I may not have put it on thick enough. 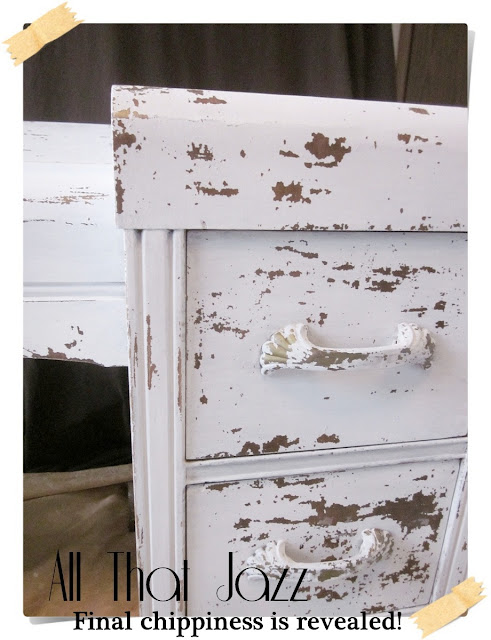 I ended up with a little over half the bag of paint left, which may not seem like much but you have to remember when you paint things white over a dark stain, it always takes more paint to get good coverage. Other colors will most likely only take 2 coats or possibly even one, so it stretches pretty far. 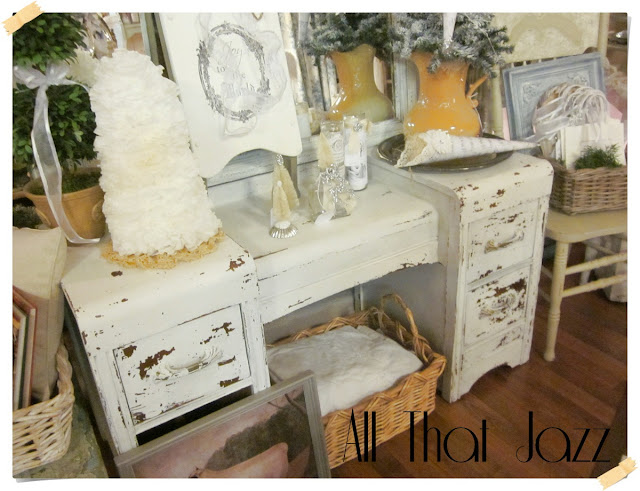 Here she is in all her chippy shabby gloriousness at All That Jazz,  awaiting a new home.

Overall it was a great experience. It was fun to try something new and see how it would react once it was added to furniture and the peeling/chipping/flaking part was the best! I'm excited to try other colors and the dark wax, which I'm told is fabulous too. Can't wait!

Lovingleigh Created By Tara at 11:02 AM 2 comments: