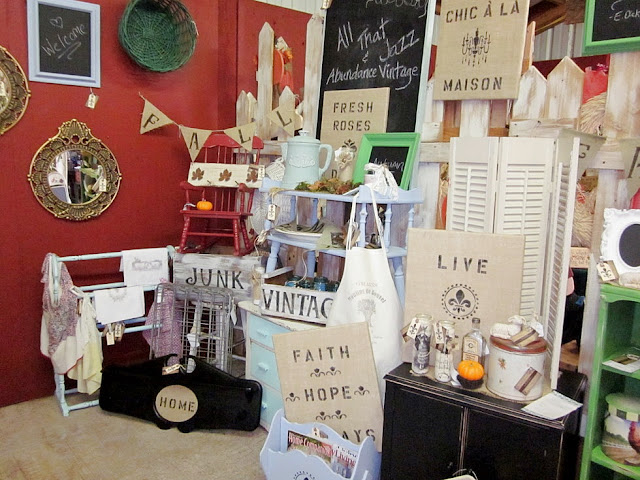 Last weekend All That Jazz joined other vendors from our shop, Abundance Vintage, in a space at a local event called The Country Chicks. They were having their annual Fall Harvest event and we were invited to join in the fun! This is Jazz's section in our shops 12 by 12 space. We were the first in so got to pick our placement in our spot! 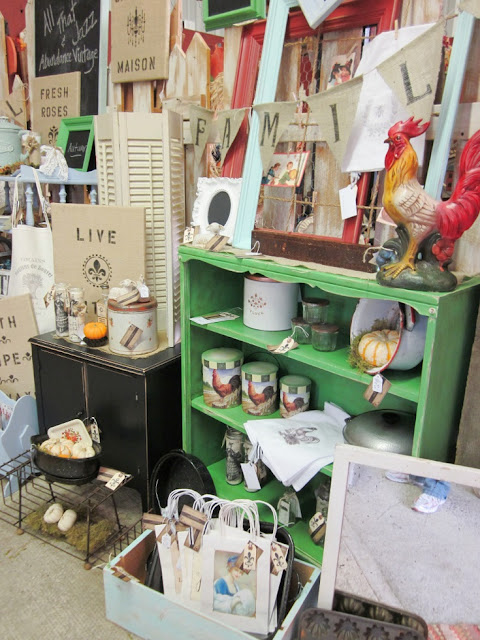 Overall we did sell some things and it was worth the effort but we didn't sell as much as I thought we would have. I think as you look at the pictures to follow, you will get an idea why. Our stuff tends to be more French Country/Shabby Chic and this show is known for a more Primitive style. I think people that shop here are sort of still stuck in that decorating mode. Lots of black and red. I tend to like lighter colors. 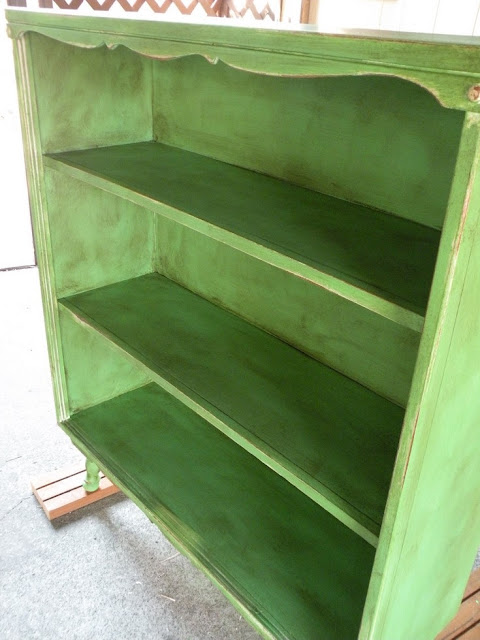 I did sell this bookcase. I don't think I showed you. It was a Goodwill find. It started out with your usual ugly brown stain and had a hole in the back, but it had dainty lines and cute feet! It was a lot of work though. I don't think I'll be doing another bookcase soon. They have too many sides! I used a lot of my Chalk Paint on it too. Then I added clear and dark wax. I loved the way the dark wax made it look grungy! 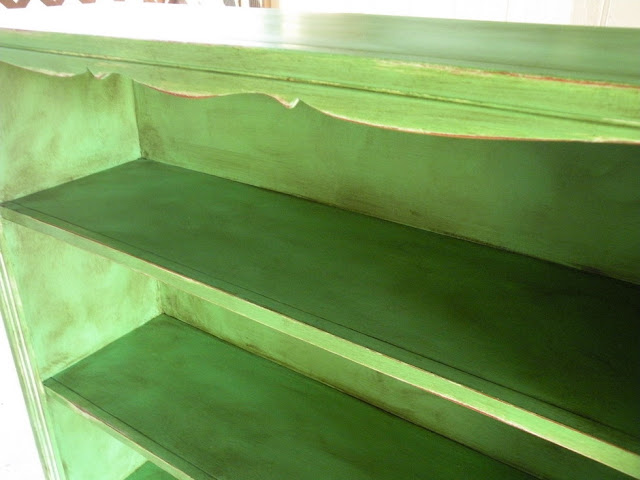 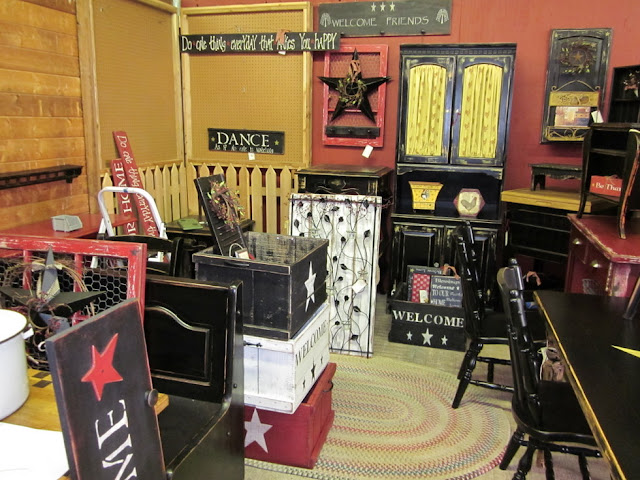 This stuff all belongs to the Country Chicks, the hostesses. She said she uses a lot of spray paint! 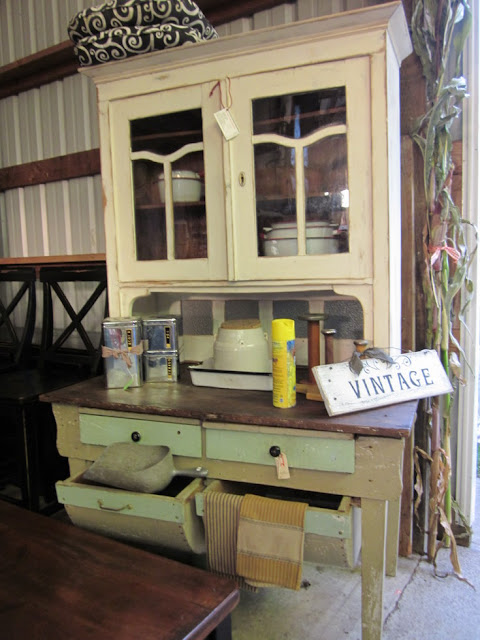 I loved this piece, it didn't sell but I'm sure it will soon. 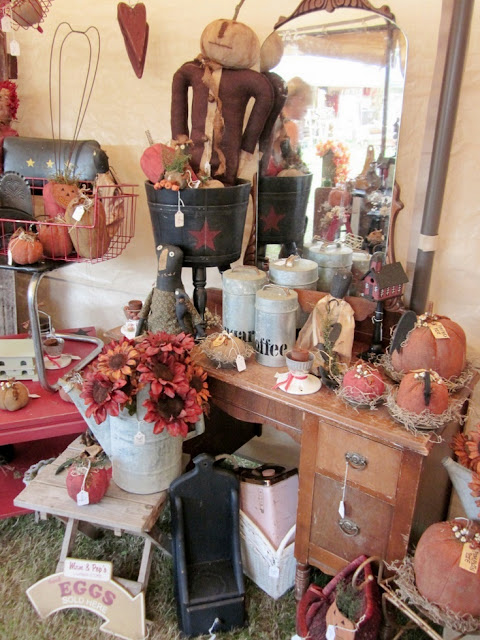 This space was a favorite, it was styled really neat and when we stopped by 2 days later it had sold a lot of things. I also wondered if we didn't sell so much because we were at the end of the line in the barn, not outside in the tents where people shopped first. However, since it rained on Saturday I was thankful for the barn. 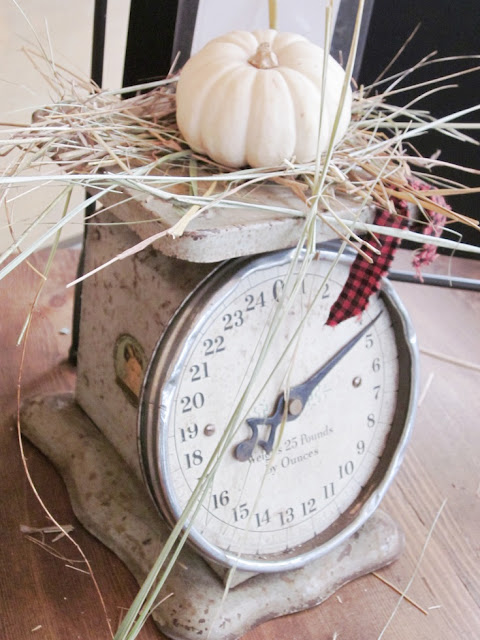 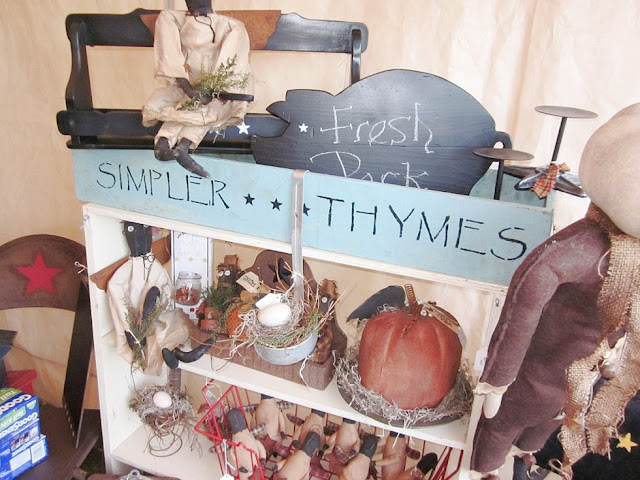 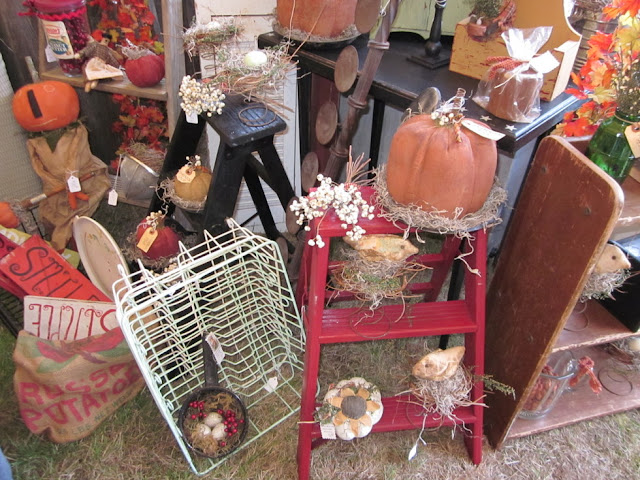 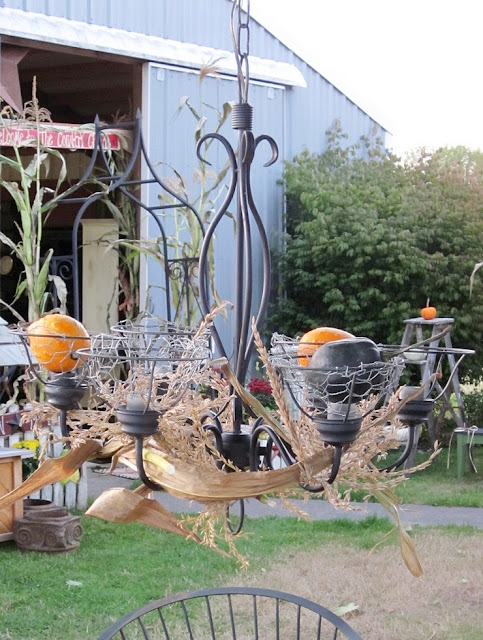 I thought this was clever! 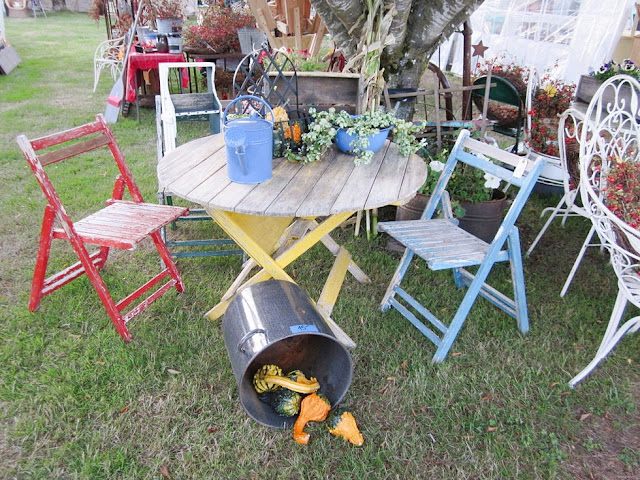 All in all it was a good weekend. It took a lot of work to get ready for it but since I had a lot of merchandise left over I don't have to worry so much about keeping the booth stocked this month. I have to admit, it's  more fun to be a shopper than a vendor, all the fun and none of the hassle!

Hope you're having a great week!

Lovingleigh Created By Tara at 8:54 PM

Sorry you didn't sell more but thanks for taking us along on a browsing trip. Love your "fall" banner, the white hutch with the flour bins and that fund chandelier!

What a fun sale. Lots of primitives but I like your style better. Maybe the sale will attract more people with your style the next time. They may have just been going for the primitives.
ALso, maybe different advertising.

You have such fun events over there Sares, I would have loved to be at this one! Gorgeous wares...I've seen at least half a dozen things I would have bought if I'd been there.

BTW you realise you are partially to blame for our renos don't you? It's all that talk about chalk paint that did it. LOL!!

Have a super weekend and try not to work too hard.
Hugs,
Sandi

Sorry honey you did not sale as much as you had anticipated. That is a bummer.
I heard that from a lot of vendors out at the huge Round Top/Warrenton show this year too. The heat was brutal and kept a lot of people from shopping.
A lady was selling the chalk paint in her booth and I was surprised at the cost of it. I almost bought some but did not.
I still have not made up my mind about the pink house. Several vendors at Warrenton show were interested but I think the economy may not be good enough to do this or it could be I am a chicken.
I think your pieces were really nice.
Love ya
Maggie

Sorry sales were not as good as you would have wished, and thank you for taking us along with you.
Your booth is fabulous and spotted a few things I would have bought.
I am sure that you would have had fun though.

Hope that you have a lovely weekend
Hugs
Carolyn

Sareski Bear! I have missed you! How are you lovely? :)

I have to say, my favorite picture here would have to be that last one! I like those bursting, washed-out but cheerful colors all used together like that!

Sareski bear, I was watching this show on a t.v. channel I think it's called "Bio Channel" or something... its a show about a group of people who go on biddings of people's abandoned, rented storage areas? Apparently, some people rent out garage rooms to store their "valuables" in, but then some of them eventually abandon the rooms completely so later on auctioneers come in and auction out all the contents of the garages and people come and bid (without being allowed to go through the garages first) they have to bid on the garage rooms based upon their own instincts of how valuable they might turn out to be, and they bid amounts like $800 or $1,500 and sometimes they really strike it big when they find a huge jewelry box inside under a lot of junk, jewelry worth thousands of dollars! It's really interesting! So anyway, while I was watching this show, I was thinking "I wonder if Sares would be interested in bidding on one of these, she could find all this stuff she might be able to sell in her store!"

I just love this time of year!!! Everything you showed is so lovely. That bookcase redo was perfect - that shade of green is wonderful. It's no surprise that it sold! Happy October!

Sares,
I'm so glad you visited! I love your blog and it has been a while! You have changed your header, love it! Things are up and down sale wise, your stuff looks fabulous, you just never know how it will go.
So glad you visited, I'll be back soon!
Rebecca