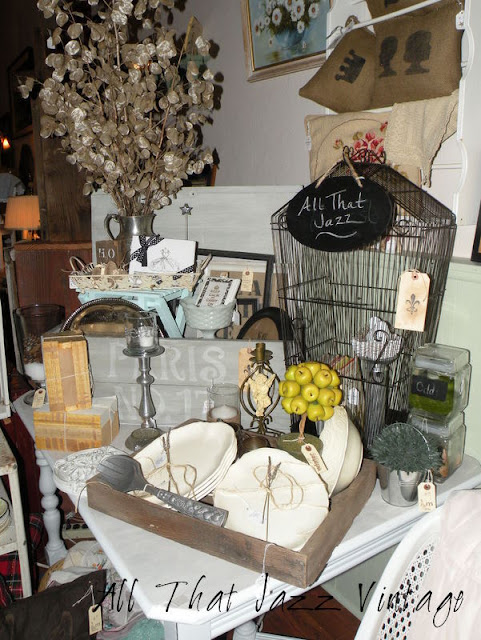 I went to Painted Lady Vintage last week so I could work in our booth and move things around. I needed to make room for that recently made over trunk and chair! Not to mention the fact I just felt like rearranging. 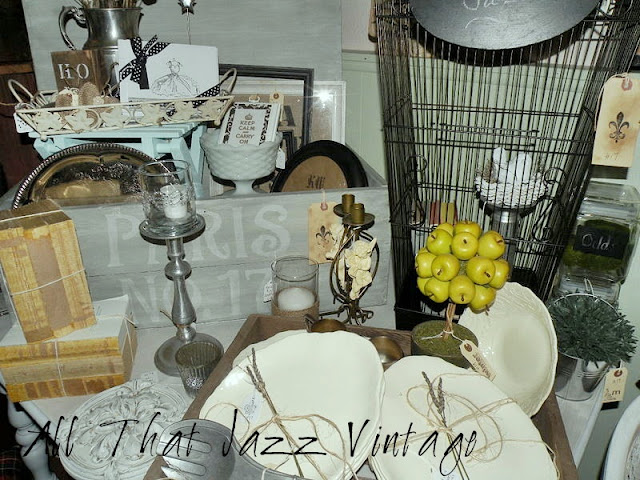 These plates went in with me last week and they have already sold. Now I have to find something else to stuff in the crate. It shouldn't be a problem since we have so many smaller items.

Which was a BIG problem when you are trying to move around everything in a small space. I had to keep tucking things in corners and under benches in another aisle across from our space. It was the owners space so it wasn't a problem and it was also the slowest day of the week which was a big help. If it had been a busy Saturday I wouldn't have attempted it.

Once I got all the furniture placed and started to stage, the fun of trying to fit everything back in began. Every time I turned around I had another pile sitting there staring at me. Man. Stuff stuff everywhere. I did manage to fit it all in. It helped when I boxed up all the leftover Christmas things that didn't sell. 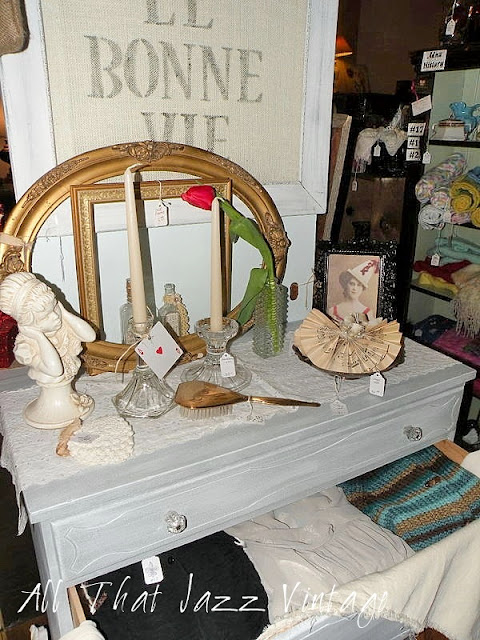 The antique oval frame was a newly added item and sold already. For less than I should have sold it for. That was a lesson learned. Just because someone makes a lower offer does NOT mean you have to take it. Especially when you know it's worth more and it's only been in the store for a day! 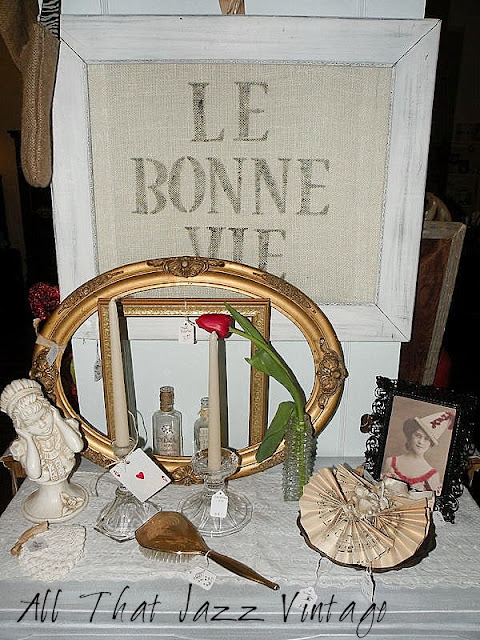 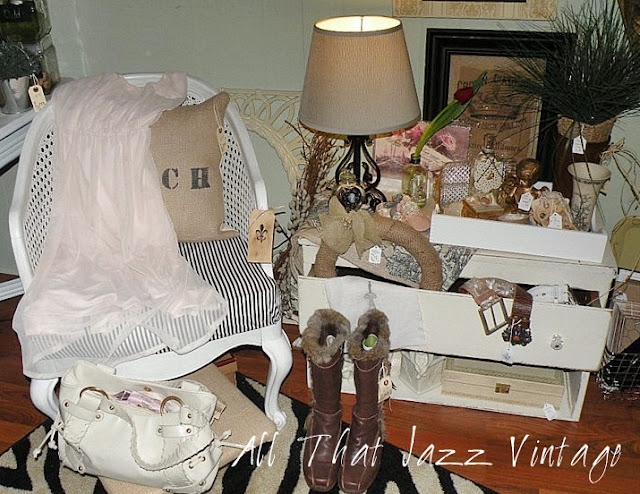 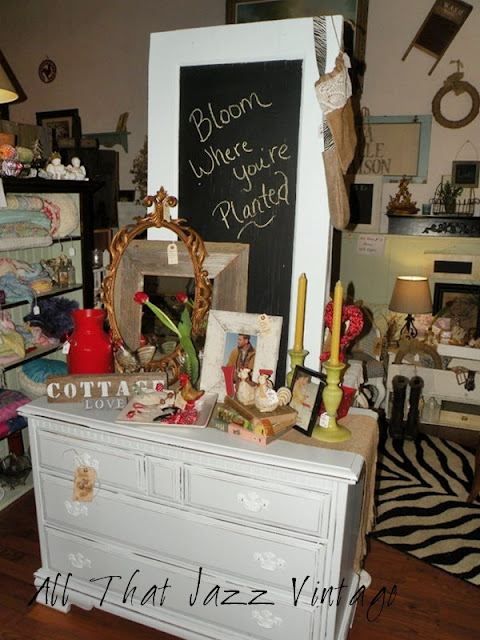 I also brought back our vintage chalkboard door we had when we first opened "All That Jazz".
It wasn't for sale then, but I painted it a light aqua and it's now up for grabs! 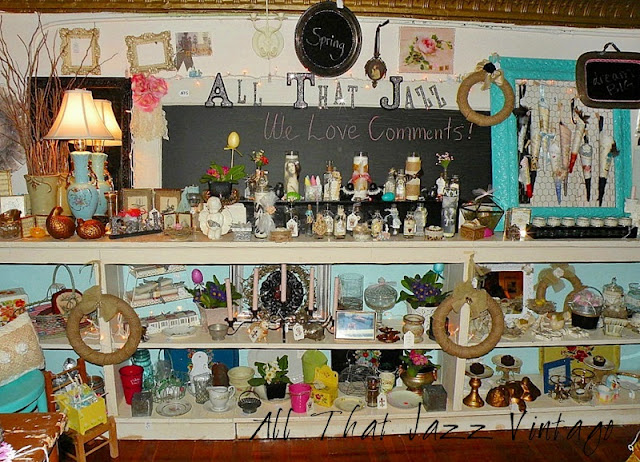 Waaaaay back when "Jazz" began. We are coming up on our 1 year anniversary in March! 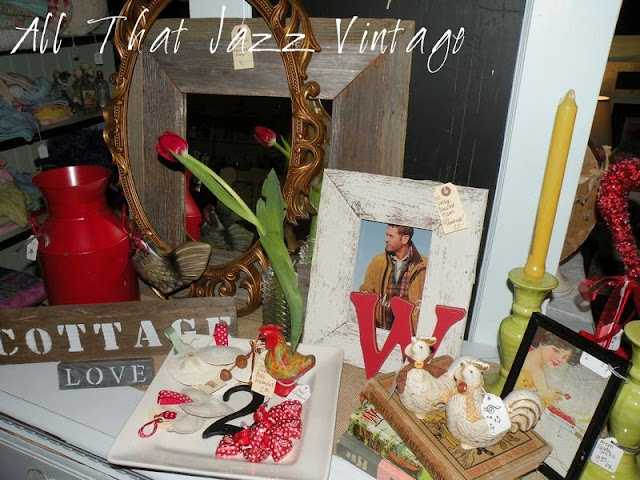 A few splashes of red were added to coincide with Valentine's Day coming up.
Next up~decorating for SPRING!

I better get my wheels a turning.

Lovingleigh Created By Tara at 10:09 PM

All That Jazz said...

Hey Sares, can you pull me one of those cute little roosters you guys blinged up!? If there are any left...I know they've been there a while, now watch them all be gone! ;-) Also, someone commented on Jazz about the pink ballet slippers, possibly wanting to buy them.
XO

Everything looks awesome and I know this is so much fun for you guys! Glad to see so many things are selling!

loving the little pail with the spikey stuff in it and that red milk can is awesome too! I wish I lived closer, I would be there everyday! You have such nice things and you create such unique and special things to. Have a great day Sares..Hugs, Jennifer

Sares, I love visiting with you, maybe selfishly because you remind me so much of myself, my beginnings. I have seen you grow in your business and I can tell you are passionate about it. Your stuff , way of merchandising and your selection keeps getting better and better and that is a true sign of a budding entrepreneur. There is money to be made in this business even in a bad economy. I'm doing it and you probably will too. Nothing but the best to you and yours, Marta.

Hi Sares!
I'm loving your booth. It looks so good and full of so many wonderful things. I would love to come shop your booth for my booth! LOL!
I know what you mean about lowering the price for a customer.
I now make it a point to tell them that I just brought it in and I'm not ready to offer a discount at this time. That usually gets them to buy it or walk away. Most of the time, they buy it.

Funny business, but you know we love it.

Looks great! It's always good to change things up - makes it look fresh and new. :) Theresa

Congrats on the looming on year anniversary! You girls have made it look so easy - love it all my friend.

Enjoy it and have fun!
Leann

So, looking back over the year are you happy you did this? I see it as a really fun hobby that makes some extra cash to respend...back into your hobby! Wink!

That castle pillow...did someone make that? How much asked the Fairyland girl with the curl...

Crazy....realllllly crazy about that chair! I'm wondering if there is anywhere here, in the teesie cottage where I could fit=stuff it in! Adorable... Love your re-do. You have lots and lots of yummy things there! I was going to go to Portland this weekend with the fam, but things fell through... Don't know when I'll be down that way again. DARN.

I had no idea you could go up the steps into the dome at the capitol, that's amazing! I'm sure they don't let you go any more, so you were so lucky to have been able to do it...