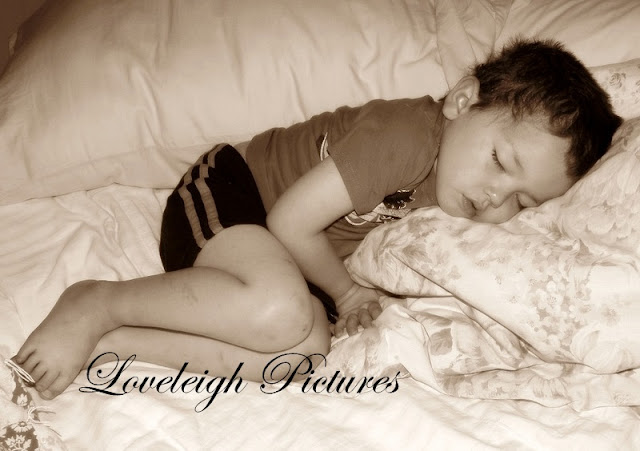 He's pretty sweet when he's sleeping. When he's awake, not so much. He's
going through a phase right now and I'm not sure if I'm going to make it
through the other side!
Now I've not been around many little boys. I have a younger brother, but he
was pretty mellow. The Man Cub is NOT mellow. He's all boy and has a lot
of energy. A LOT of energy. He's doing this thing where you know he's about
to do something he shouldn't,

you tell him not to,
he looks at you,
then does it anyway.
All the while he's looking at you.

Anyone else encountered this problem.

Naptime is also up for grabs. Sometimes yes, sometimes no.
Lord have mercy, I need this kid to have a nap still.


Then there is the picking on the older sister factor. You'd think
since she's quite a bit bigger than him he wouldn't attempt it.

I think she's been to0 nice to him. He thinks he can get away
with messing with her and her stuff. Whatever is his is his~ and
whatever is hers is his.

We musn't forget about the whole running from you thing when he knows
he's in trouble. Because he doesn't want to got to time-out. 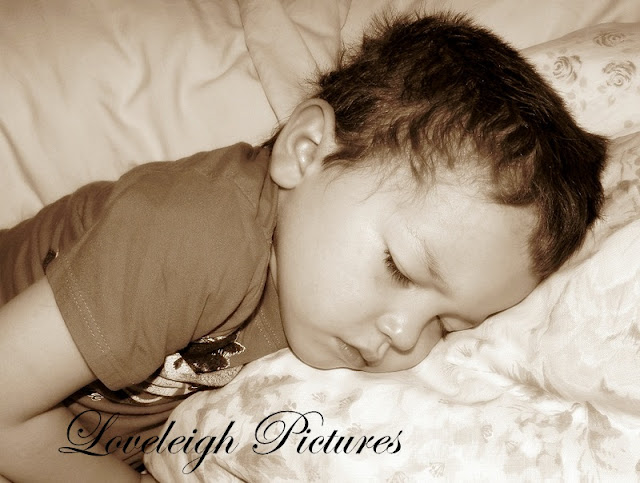 Nope this picture wasn't from today. There was no nap today.

I gave up when I discovered he had a little surprise for me in his pants.

I had 3, count them 3 meltdowns. Tears were involved.

Hope your day went better. Tomorrow will much better for me,
I'm off duty, for 3 whole days!

Lovingleigh Created By Tara at 12:00 AM

He's so adorable....but yes, they can really try your patience! My son was the same way when he was little!

Oh, but look at that face!

can't believe that little angel face could cause any problems...NOT...LOL...

Good Morning Sares Sweetie...
They are so precious when they are asleep, and when they want to give us big hugs and kisses, but they can be a handful. Believe me one day all of this will be SO worth it. They grow up and move on, leaving such holes in our hearts, and then one day they come back with some little ones of their own.

Therein lies the best gift of all. Pay backs. It does come back to haunt them. All three of mine have found that to be true. They have all found themself in at least one of their children, in some cases two or three? Perhaps.

I am wiping your tear sweet friend. Just keep on going as you can. One day at a time, one crisis at a time. My two boys, oh they were awnry, but they grew up one day. Now, not so anwry, just handsome and great Dads to theirs.

Love you sweet friend. Today will be better. It is a new day.

Many hugs sweetie and so much love, Sherry

Sares, sweet friend, he is absolutely darling! They can work on ya, can't they!

Challenging they can be, tears flow free, one day we stand back & watch them with their kid-lings, such glee!
And, worth every minute of the in between to get to that stage, Sares.

Have a beautiful day, sweet one.
TTFN ~Hugs, Marydon

Dang good thing he is so darn cute because I know you don't get paid nearly enough! I laughed out loud while reading your blog...to the point of my producing my own tears. Perhaps he is like Jax, he needs lots of activity...like running at the park for an hour, before taking a long nap. His sissy has even been known to nap after our excursions!

Oh Sares I remember days like this! I can laugh now...not then. Someday this will all be a memory and you will laugh too. What a gorgeous sleeping angel you have on your hands. I think my heart just melted.
hugs

They ALL look like little angels when they are sleeping! Boys will be boys - sorry the last few days has been so nerve-wracking for you. Many hugs to you! Theresa

Ahhhh.... I wonder what he was dreaming up to do when the nap was over?!

It is when they are at their best ;) He is a sweetie!
Hugs, Lisa

Enjoy the break! He looks too precious in those photos though, hard to stay annoyed with him for long, eh??

Oh dear Sares, such a sweet and precious little boy.
Sounds a lot like my Son, he was always a live wire when he was little and can say now that at 18 he is lovely to be with.

I hope tomorrow will be better.
Hugs
Carolyn

Sares!
I really missed seeing the little Man Cub!!!! He even looks like he's running around in his dreams...look at that crinkle between his eyes!!! hahahaha

I hope you are doing okay and I miss you. I love the yard sale finds!!!! I can't believe that it took you over night to buy those plates!!!!! Glad they were still there in the morning. It's a good thing I didn't see them first :)

I haven't been so happy since my return... I returned different... but everything around me is the same... and that's hard... :(