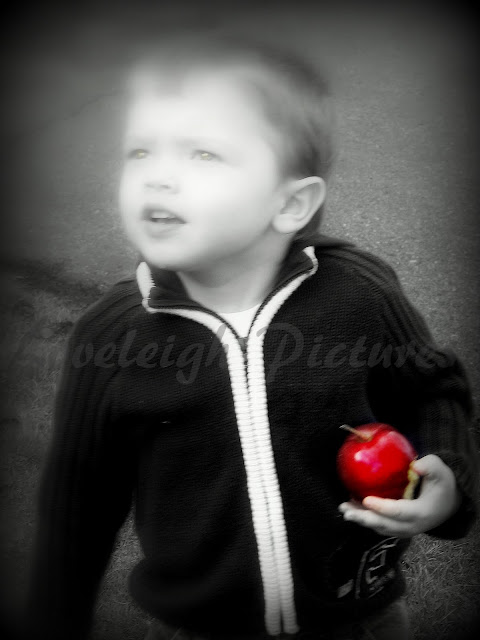 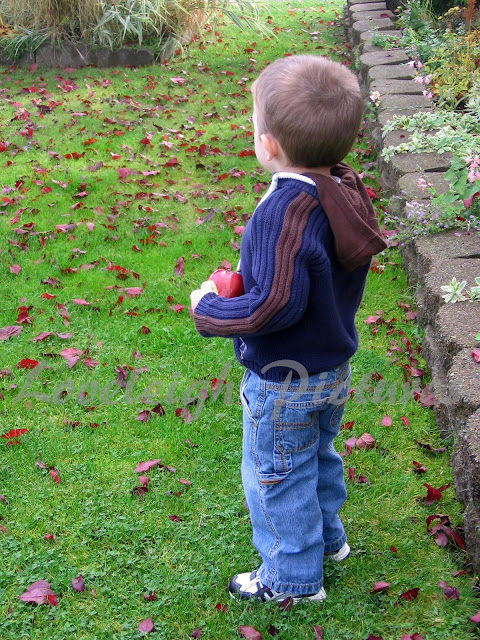 The Man Cub would like to dedicate this photo shoot to a few of his female
relations that have a minor fixation with the movie Twilight and a certain
hunky Edward. 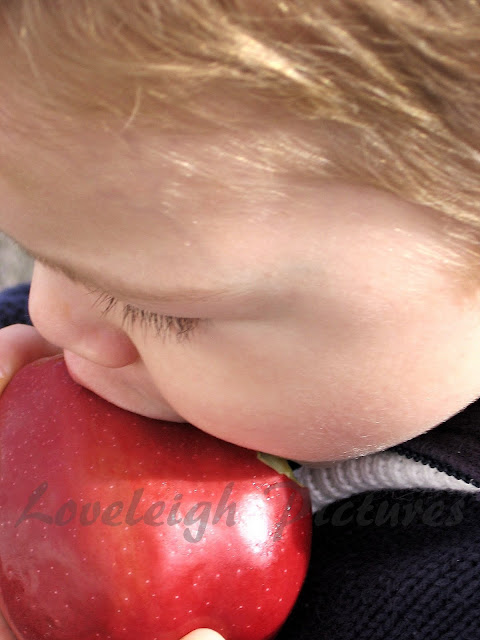 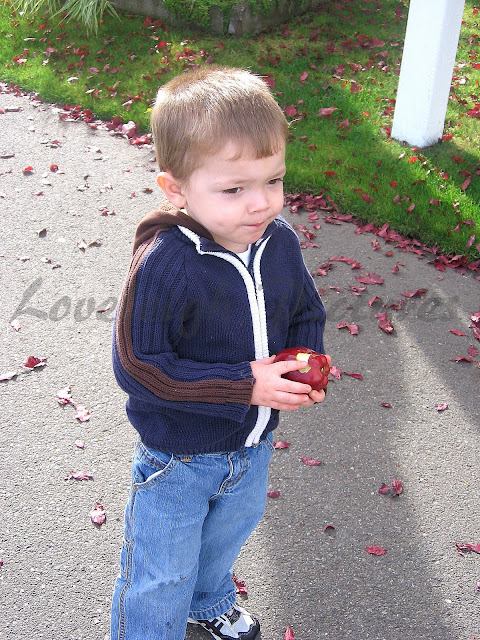 The Man Cub is a "hunk in training" himself and plans on breaking
many a young girl's heart when he gets a bit older, therefor
he derives much inspiration from Edward. Not the whole
vampire thang, just the "hunk" part. The Man Cub also asked that I NOT reveal the names of these Twilight
obsessed relations, in order to protect their innocence. He doesn't want
to embarrass these GROWN WOMEN and wants to keep his "adorable
status" intact while he's working on his "hunk status". 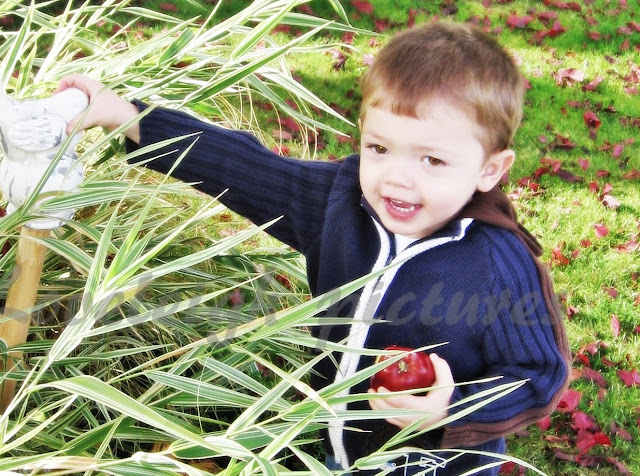 Yes indeed, there is trouble ahead for a whole new generation of
young ladies! 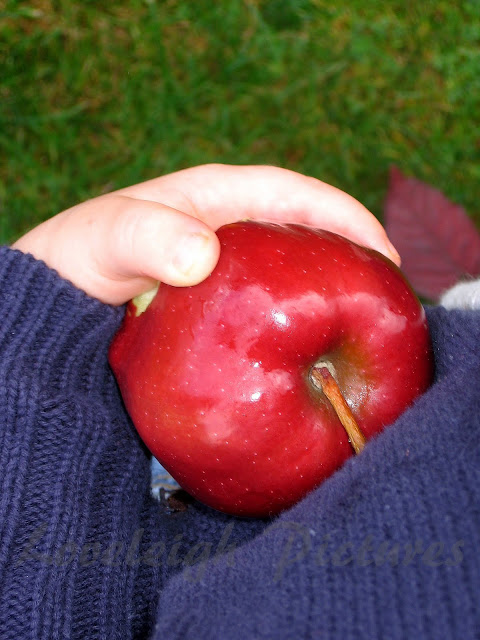 Lovingleigh Created By Tara at 10:00 AM

could he get any more adorable? I'd like to bite into those cheeks like they were that apple. yummy thing. 'nuf said.

These are the most beautiful images...he is definately going to be a lady killer for the next generation!!! xOxO

Oh I feel sorry for the girls that cross his path when he gets older! He is adorable with a capital A!

-chuckles- Ahhhh yes, those "grown" Twilight fans. >,-) You happen to be reading the words of one who claims to be the "World's Oldest Twilight Fan" did you know?

But, but, but... The Man Cub should switch Teams, if he's working on his "hunk status." Because although 'Edward' is nice looking... He is simply NOT a HUNK.

Now, how about introducing me to your grown Twilight obsessed relations? I'll be gentle with them, I assure you. [You know Aunt Amelia is always gentle, right? -Hahhh-]

Anyway, I been all through the Twilight Mania Thing, and have even come out on the other side! Still enjoying. But no longer obsessed. I offer my services as a sort of a Twilight AAA, if you really think some of those relations are in need. >,-)

I love what you have done with these photos Sares (very professional)and he's such a little sweetie!
Hugs,
Sandi

And Re: The "Practical Magic" house... Yes the whole house is so cool. It begs someone to build it, for real.

But I think I read that Sandra Bullock actually had her home's Kitchen done, like the "Practical Magic" kitchen. Ever read that?

And I love Sandy Bullock anyway. But then, doesn't everyone? :-)

Ohh yes, he is gonna be a heart breaker. What a cutie pie!!!

Hey, thanks for visiting today!

Ahhhh, what a cutie he is!

That little man is certainly going to break a lot of hearts! He is such a doll!! Okay, I confess, I have not read or seen Twilight. My niece gave me the book, but I have not read it yet. Those who have read it and seen the movie seem to really love Twilight. Now, you could not be the one obsessing over the Twilight Hunk, could you???? I hope you are having a good week and thank you for stopping by for a visit, sweet friend. Vicki

Sares, what a beautiful post! Your little 'man cub' is so darn cute . . . yes, I can see a future of many broken hearts!

P.S. I have an award for you at the Manor, please stop by when you have a chance!

Sares, that is one darling little boy! So, so, SO cute.

Will he be moving to Forks Washington any time soon? I have yet to be crowned a grandmother in life, however...when I do, my future generation grand daughters have a lot to look forward to. I think if Twilight does not prove fruitful he could definitly try for the role of Prince Charming!

... what a handsome wee one! Too bad he can't fast forward or we can fast backward ... what fun we'd have.

Great pictures of your little guy. Yes Edward better watch his back!
Have a blessed day!
Gwen

This little guy certainly will break hearts in the years to come,what a sweetie!Your picture taking is very good.
I wish my grandson would be still long enough for a few good shots...I have to chase him, and then he hides his face:)))
Thanks for your visit today.
PS;Did I tell you...when I was in Wales there was the most beautiful little vine covered street on a hill,baring your name...Loveleigh High Street...I thought of you.
Gracie

I think that he is handsome if I say so myself!!!

What a sweet boy and yes, he is going to be a heartbreaker.

Many thanks for your kind words, yoou left for me.

Oh...he's gorgeous!!! Adult women and Twilight? Goodness...could there be such a thing? But Your little gorgeous man hunk is way better than Edward...even more than Jacob! Not that I know these things...

Thank You for coming to visit me - and thank you for adding me to your giveaway bar!!! Love your blog!

That was just too cute!!! He is gonna be a heart breaker for sure!!!

Your photography just keeps getting better and better, Sares! Seriously.

What better way to spend a cold October evening than to sit in a quite house with a cup of real hot chocolate (none of that powered stuff) and find wonderful new blogs like yours! Your pictures are breath taking. I really like your little "hunk" biting the apple.

As a twilight fan I love this! Tell him thank you! You are right he is a hunk in training!
Hugs, Lisa

Cute post Sares! Yes that little man cub is adorable-until you take him shopping!!! Then he turns unto a vampire!

What a beautiful little boy! And your photos are SPECTACULAR! Love all the pics, Sares! Thanks for sharing!

Sares,
He is adoarble! This post made me think of a baby bib that I bought for my future grandson's babyshower last month. It says "Mom's...lock up your daughters." My son thought it was so cute.

Sorry I missed this post...I was outa town. How adorable! You are so creative, I love the editing. I just cracked up at him with the apple. As a major fan, you know I love this! And the Edward Man Cub! ;) Did you use your new camera yet??