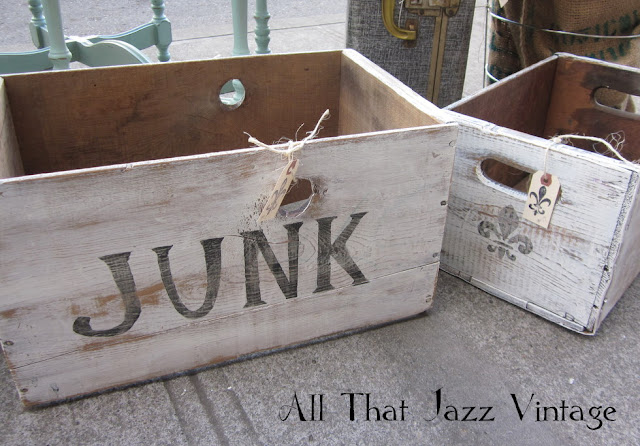 Yep, we had a big ole lovely pile of J*U*N*K for the antique fest. 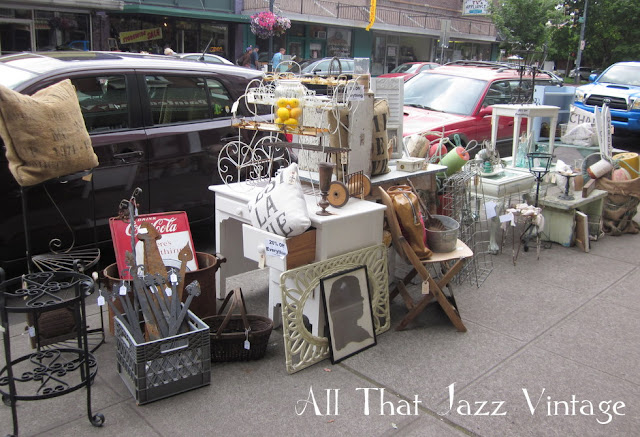 See all this, it  belongs to All That Jazz. I can't believe we had that much cr*p to set out. None of the other vendors were interested in putting things on the sidewalk. Go figure. When we set up I was worried we were taking up too much room but it turned out it wasn't an issue. It worked out great for us!


That little white desk was one of the first things to sell from the sidewalk.
It was bought for a little 7 year old girl. 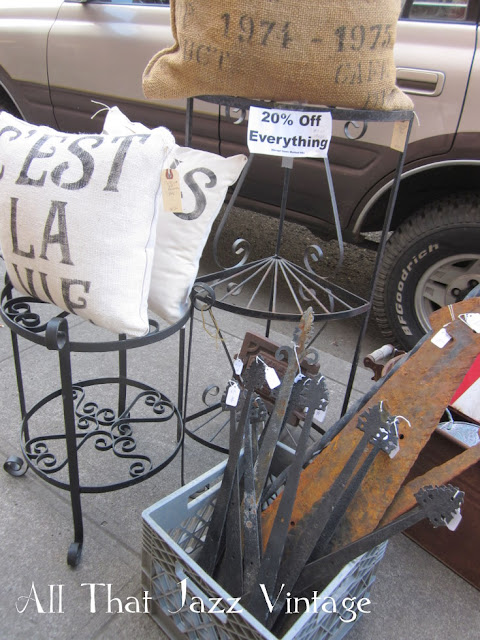 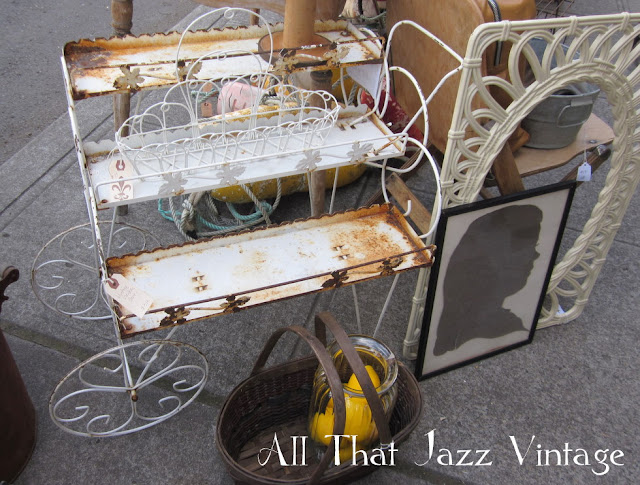 We had rust in abundance but didn't seem to have many buyers interested in purchasing said rust. 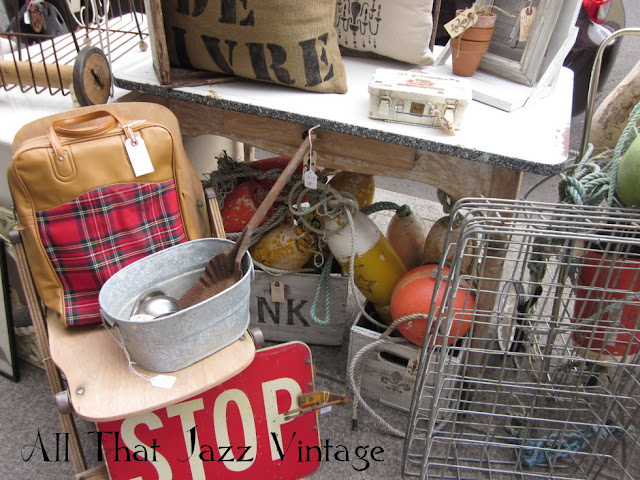 I didn't sell a single buoy. I had to haul half of them back home.
I may have to chuck them in the ocean. 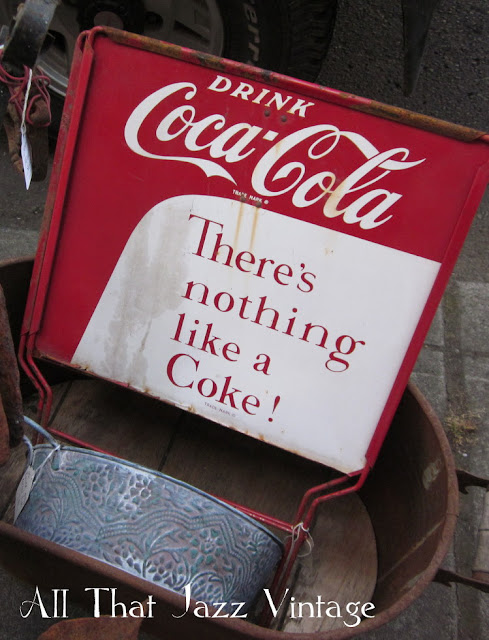 Michelle brought these from the ranch too. Aren't they cool! She sold one! 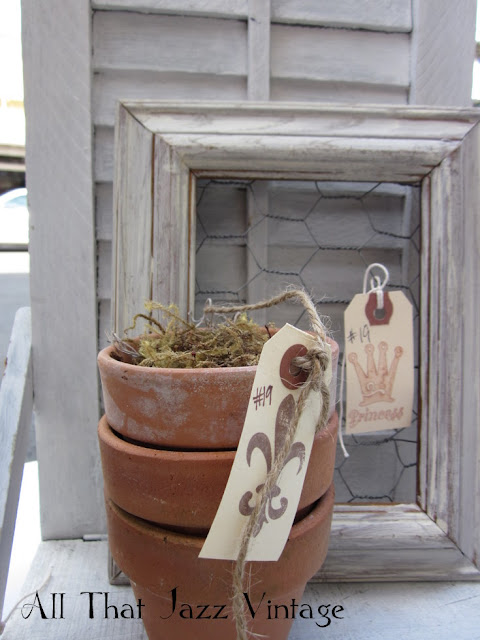 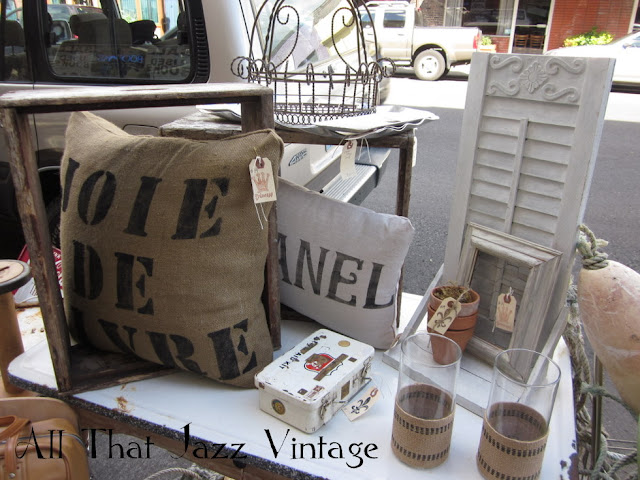 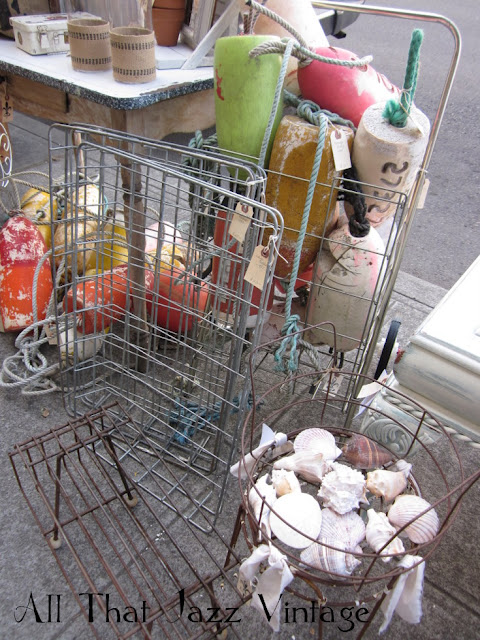 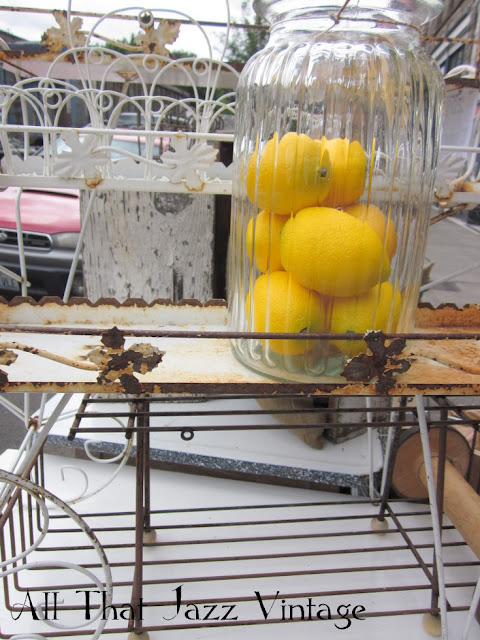 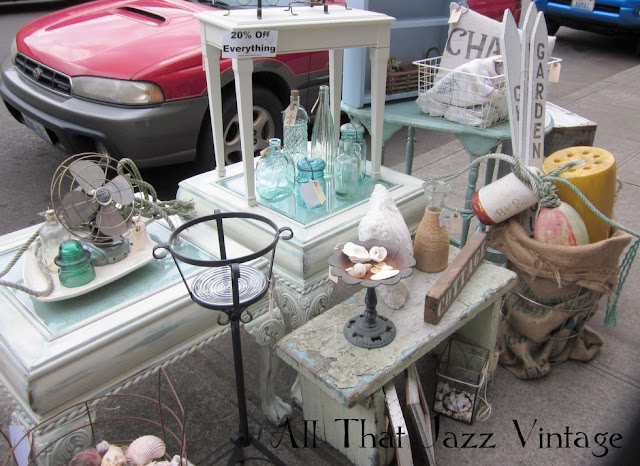 I sold these two end tables about a half an hour before I went to move the stuff indoors. Hallelujah!!! I was so worried I was going to have to haul these home and store them again because there is no room in the booth at the moment. Crisis averted. The tall green table at the far right (with the basket on it) sold the first night along with... 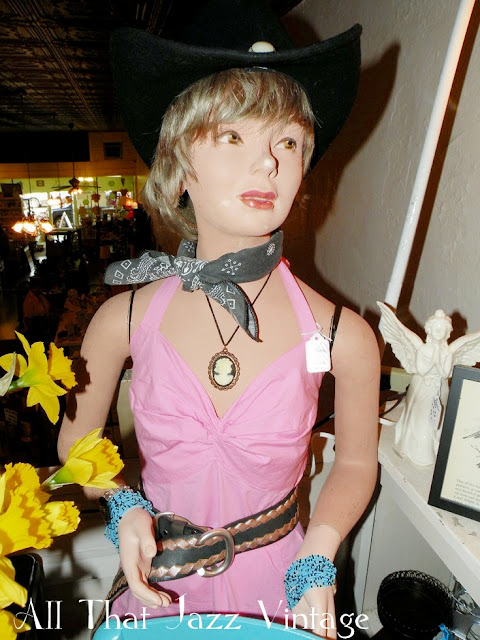 FIFI
Our mannequin mascot we had when we first started All That Jazz. She'd been floating around a while and I decided it was time for her to find a new home.
We had a pretty good weekend although the crowds were a lot smaller this year than last year. I'm not sure if it's due to the economy or the fact that there was a bigger antique show an hour and a half south of us.
It was still worth the effort and I had fun with Michelle. This will be our last "Jazz" event together since she's bailing on me at the end of the month. She's moved on to greener pastures! Literally.  There are some other changes just around the bend for our Jazz booth soon. I'll share when I can.
Stay tuned for the next post when I'll share some pictures from other vendors at the antique fest.
Have a great week!

Lovingleigh Created By Tara at 7:28 PM

It must have been fun to be there at the Antique Festival and glad that you sold some things.
Good luck, with the other changes around the bend, for your Jazz booth.

Hi Sares,
I know how hard it is to set up an outside sale. I spied many things that I would have bought.
Funny thing about the rust, people here do not seem to care much for it either. If I paint it, they will buy it, but not with the rust.

Have a wonderful selling week.

I haven't been around in blogland for a while. Decided to pop in this morning to check on a few of my friends. Oh, I wish I lived closer to you. I saw many things that I just loved! Those end tables that you sold were gorgeous!

What a wonderful bunch of junk! I love the crates in the first photo!! I think it is the economy, summer vacations, and people thinking about back to school.
Glad you had fun and got some stuff sold!!
Have a great week!
Becky

I've always loved dear Fifi...she seems to wear a bewildered look, just like me at times!

Yes, the Portland show may have snatched a few customers but I think you have loyal customers in a small but cute town.

Smart move out on the sidewalk. Sorry Michelle is off to trot but something great will come of it for both of you, I'm sure.

Thanks for stopping by to see me. I always look towards your visits, YEP YEP!

Durn it! I missed out on Miss Fifi! I wouldn've loved to have had her *winks* And I think I could've helped remove some of that rust lol! I rally like that sweet flower cart. Vanna

I love all, yes all, of your junk! Glad you sold some stuff that is always nice when you go to all that trouble. I hope you got a good price for Fifi and didn't just let her go.....
So sorry I have been away....missed seeing all your neat stuff!

Finally got back to see the photos...sounds like you had a great time and I'm so pleased you didn't have to lug it ALL back inside. Seems the effort you put into the sidewalk paid off. Hope all the sales continue to roll along and you manage okay without Michelle. I guess the time comes when we all have to move on to other things or we tend to get stuck in a rut.

Your treasures look great! Sorry the festival didn't go quite as well as you'd hope. I'm sure there are better days ahead. I love your pillows, blue bottles and furniture!
Hugs cousin!
Betsy

I just stumbled upon your blog today and just love it! Your style is right up my alley. Sure wish I lived closer so I could visit your store.