*This is a repost. I first posted it last year and it was one of my favorites so I thought I'd share it again! Make sure you check out my Playlist too. There's lots of fabulous Christmas music there and if you have a Playlist of your own you may want to snag some songs for your own.

Have you ever heard of the Polar Express? It was originally a book written
by Chris Van Allsburg in 1985 before it hit the big screen and shot to fame
amongst all children at heart, young and old. 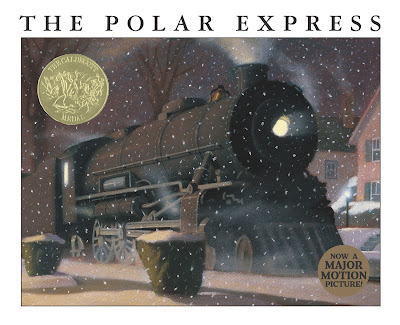 While laying in bed one night shortly before Christmas, a boy wonders if
Santa really exists. Then suddenly he hears something strange in the night.
Something that sounds like a train. He peeks out his window and to what
do his eyes appear...a big black steam train rolling smack dab down the
middle of the street. What does he do? He investigates, of course.

He ends up on the train full of other pajama clad children, skeptical of Santa
and therefor on their way to the North Pole to meet the one and only head
guy in charge, SANTA. 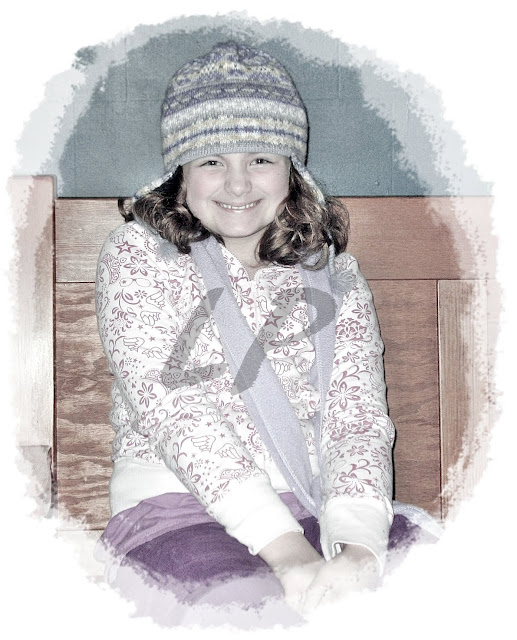 Two other children recently got the opportunity to ride the magical Polar
Express. Here Boo waits in anticipation. At nine years old, she's a bit
skeptical herself so she is about to take the perfect journey! 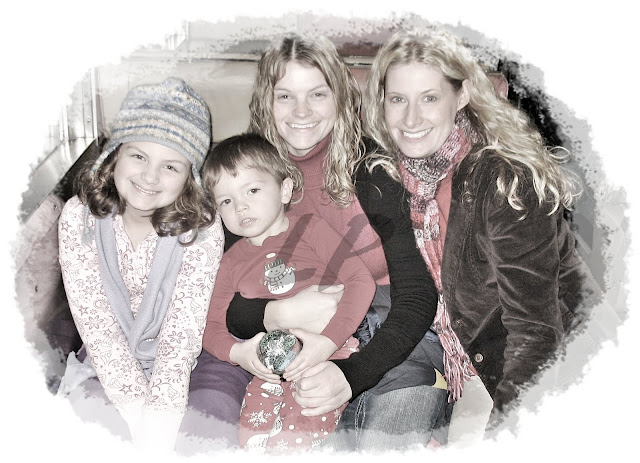 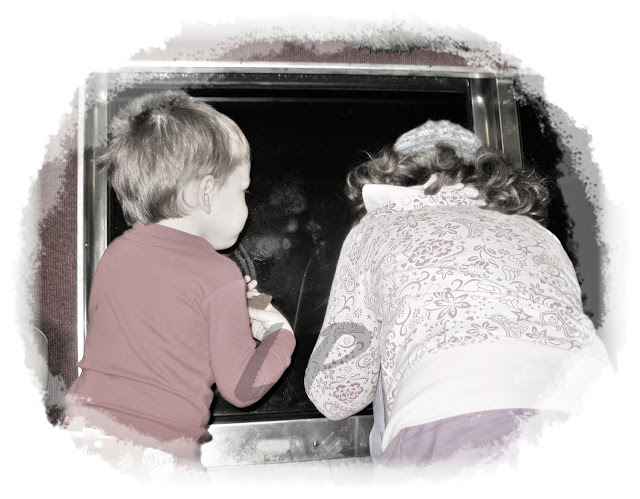 They're on their way to the North Pole!

Make sure you have your ticket so you can have it punched
(and they won't toss your tookus off). 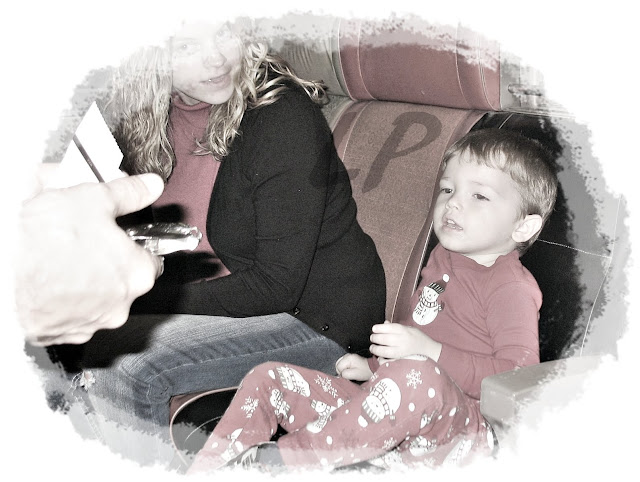 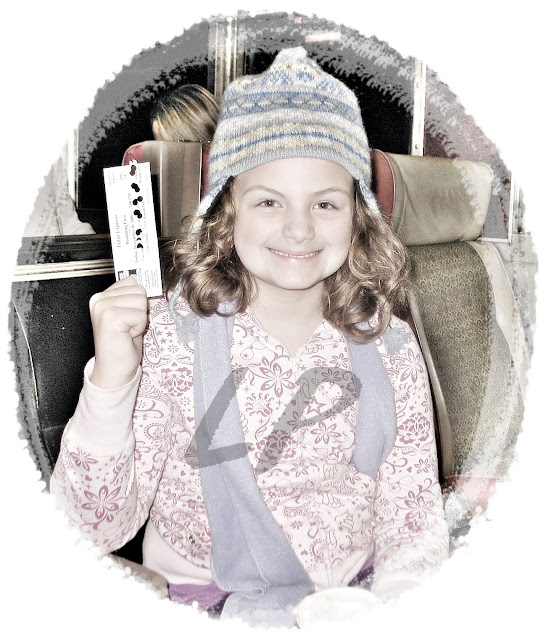 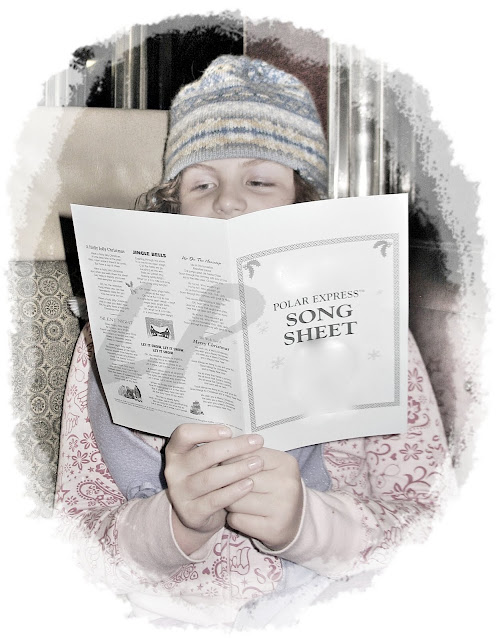 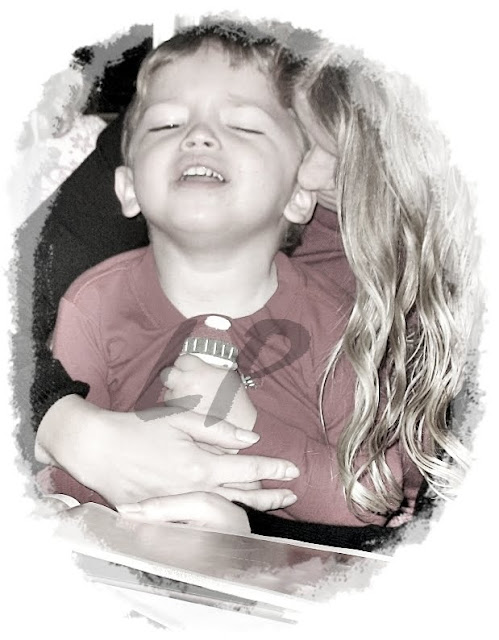 Let's fuss and wiggle about impatiently!

HOT CHOCOLATE!
(One of the Man Cubs obsessions!) 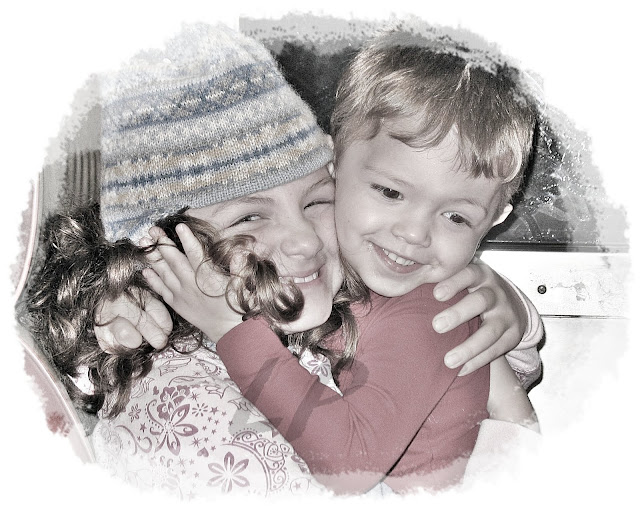 A cuddle for Sissy! 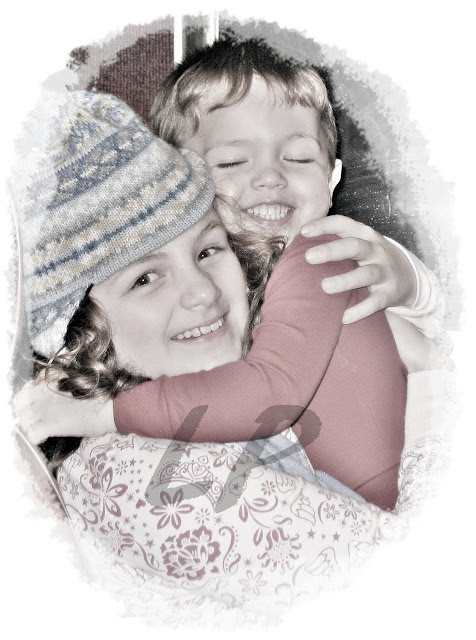 And a great BIG squeeze!

Finally, arrival at the North Pole and Santa! Only to be given the first gift
of the season, a magical bell that only rings for those that truly believe in 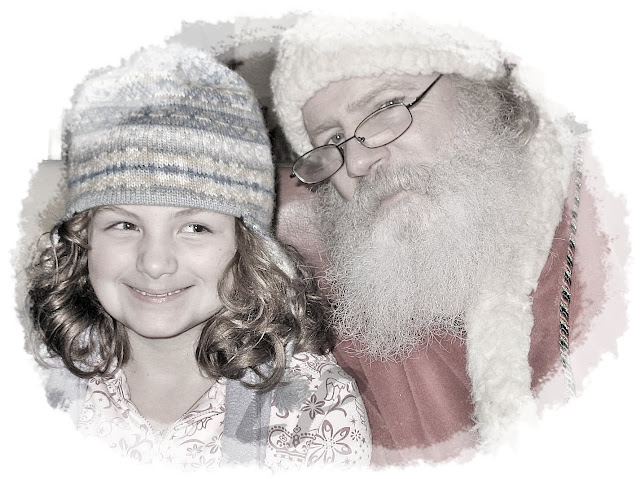 Yes, Santa really does exist! As Boo can attest.
The Man Cub was just too scared to meet him.

Soon Santa had to be off to deliver the presents so it was all aboooooard,
back on the train headed for home.

Do YOU believe in the magic of Santa? 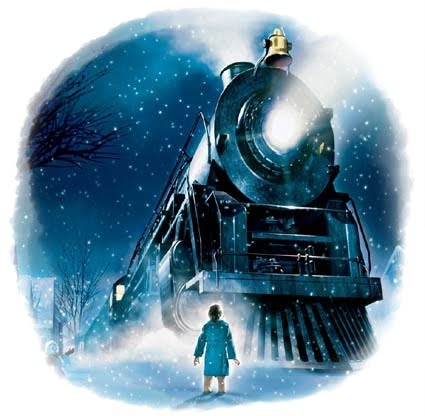 It just makes life much more interesting and open to the possibilities when
you DO!

Thank you for joining me for this weeks "Pink Saturday Christmas Challenge"! I sort of combined music
and movies this week. Thank you Beverly for once again hosting our Pink Saturday. You can find all the participants at Beverly's How Sweet The Sound blog. Happy Pink Saturday!
Only a week left til' Christmas!!!
Get your PINK on!

Lovingleigh Created By Tara at 3:34 PM

Jil~Say It With Roses said...

Sares, this was wonderful! Made me wish I could hop aboard and have hot chocolate, too!
Lovely family!
Have a very happy and Merry Christmas,
Jil
PS My blog won't post until tomorrow....I tried to undo it and could not...sigh!

I have to admit that I've watched this movie at least three times this week alone. I love it more and more each time I watch it. And the music gives me goose bumps. It really makes you Believe in Santa, doesn't it? I know I do. How about you?

The kids photos are awesome as well is the entire post. Thank you for reposting it as I didn't see it last season. Enjoy your holidays.

Awww, I was in tears reading this (may be PMS..I am just saying)! This was beautiful!

Tara ~ This is even better this time around ... love the memories of last year.

Thank you for sharing this again. I had not seen it and it is too good not to feature at this time of year..

I'm just speechless, awesome post Sares. We just watched this about a week about for the 5th time. We are crazy big kids at heart for sure.
Beautiful and magical for sure.
Thank you for the Christmas card. It made me feel so loved.

I enjoyed this so much...I still believe! such a sweet post. I loved the movie and haven't seen it yet this year but it's on my list of things to do....hugs, Jennifer

Sares: I remember reading this last year and it is still wonderful this year. Thank you for being my friend. You are a gift to me. Blessings, Martha

That is so adorable! I hope you and your family have a wonderful Christmas!

I love your pictures! They are just magical! Gorgeous kids too! Polar Express is one of my favorite stories. My little one had a Polar Express pajama party at school last week. Christmas is so fun!
Blessings to you and yours!
Tammy

i saw that movie! I do envy little boys and girls at times. To have a mind that is full of hope and possibilities. :-)

(I have missed blogging and visiting. It's nice to have finally dropped by again :-) )

That was just lovely. So many smiling faces. Happy Pink Saturday.

Happy Holidays to you and your family..Thank you for sharing HPS!

Hi sweetie! Loved your photos. I could go for some hot chocolate right now...it's brrrr here in San Antonio..lol!

Yes, my husband and I watched this just last night..~~~Celebrating in this CHRISTmas Season with my Sister's in Blogging , and Thankful that you are 1 of them~~~Hugs Dena

What a delightful post! Thanks for sharing and very Merry Pinks to you and your family!

That has got to be one of the best PS posts!!! Your photos are fantastic!! In New Hope, PA they have at the holidays an old train that they turn into the "POLAR EXPRESS" your post reminds me of that!
I still believe in Santa!!
Have a great Holiday!
Smiles~
Cricket

(I've been eyeing that pink house for over a month now and was so tickled pink, LOL, when I went in there today and it was 40% off!!!)

Children make Christmas so magical. I love this post and all the sweet faces!

Wishing you a very Merry Christmas!

Hi Sares,
Stopping by on this Monday morning. I went to Warm Beach Camp in Stanwood to The Lights of Christmas and saw their brand new display of The Polar Express. It was awesome. Check it out on my blog today!
Happy Christmas week!

What a beautiful post Sares! And I love the pictures of Haley and Man Cub.