Where Have I Been...

Did you miss me? Or did you not even notice I haven't been around
much lately?! So here's the scoop. I've been to court. Frequently. The
summons came a couple of months ago letting me know my life would
soon be put on hold, hijacked for the month of April. 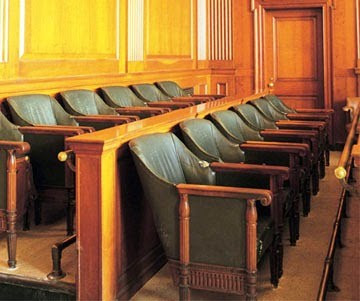 Anyone else had to do this? This was my first time and it was not an
enjoyable experience. But it was my civic duty. So they told me in the
15 minute video we had to watch on the first day of reporting. On
the UP side I can expect a LARGE check for my services. $15 a day is
the going rate in my State. The Judge said they have been trying to get
us jurors a pay raise since the 1950's. So much for inflation. No trickle
down for those that actually OBEY the law.

I got the PRIVILEGE of sitting on one trial. I thought perhaps I would
have feelings of guilt about finding someone guilty. But I didn't. Not
when you have to go with the interpretation of the law. It was a rather
mundane trial with a malicious mischief charge, which was fine with me.
I would NOT want to sit on a more serious case like a murder or a rape.
I think it would be heartbreaking. Kudos to all those jurors who have had
to do so, you have earned my deepest respect.
Yes, it was rather boring, the most excitement came when the Judge
practically yelled at the defense attorney once. It was all I could do to
keep from grinning. Pathetic huh? I am one of those people who
sometimes laugh when people fall too. I wasn't alone though, it amused
some of the other jurors also. The seats were comfortable though, perhaps
a bit too much, I almost fell asleep once, I just could NOT keep my eyes
open! The bailiff told us he had a woman recently who DID fall asleep.
He had to keep passing her cups of water!
So I am finally done! The phone recording telling you that you have been
excused for the rest of the month is like being let out of school for the
Summer. SWEET FREEDOM! Next week there is no court due to a
conference the Judges have to attend, thank goodness. Now I just have to
see when I get summoned again. They say it's a random computer draw,
hopefully the computer will give me a grace period, say 5 to 10 years.

I can't completely blame the court system for my lack of blogging
though. I have recently become addicted to an online game I just
discovered called Bricks. It's where I have been going when I
turn on the computer, instead of to the blogs. Oops.

Have any of you heard of the site I found it on... All My Favs.
My Aunt emailed the site to me last year and it's amazing. It has tons
of popular sites for games, weather, maps, video sites, search engines,
news, shopping, magazines, movies, blogs, and recipes and so much
more. I highly recommend it. 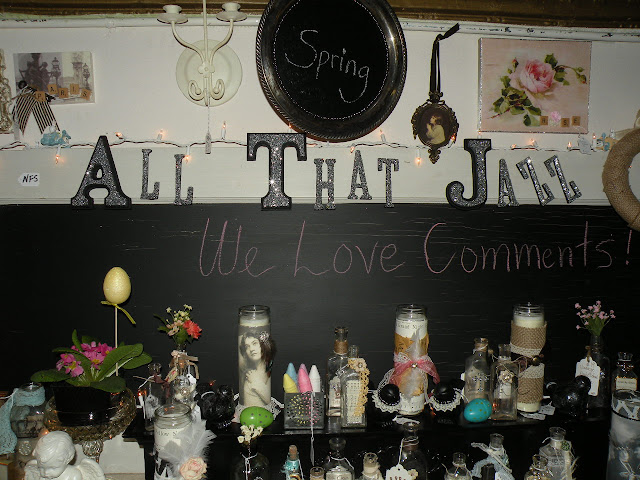 Also on the horizon, this weekend to be exact, is moving day for All That
Jazz. When we moved into our booth we were upstairs in the loft tucked
away in a corner. After only a month the opportunity came to move
downstairs into a bigger booth so we snatched it up. It costs more, but we
are hoping to make up for it in sales since we will be in a more prominent
location, closer to the cash register, hee hee!

So I hope to get back into the groove and plan to spend some time
catching up with you all. Thanks for sticking with me through this
post, it was a bit long-winded for me I KNOW!

Lovingleigh Created By Tara at 7:50 PM

I was wondering where you were!!

Oh, yeah, I turned 18 and immediately got called for jury duty. I have served on too MANY. And when I became a courtroom clerk I thought, ah, they won't call me or select me, NOT!!! And I'm always #1 or #6!!

I get called in every two years like clockwork. My dad is 95 and has NEVER been called!

Congrats on the new location for your booth! Whoo-hoo!!

Yes of course we missed your smiling face around blogland!

Don't envy you one bit Sares...hey is there an age cut off somewhere in there? LOL!

Hope you do well in the new spot and makes heaps more dosh.

So that's where you were... yes, I did notice you hadn't been around and I missed you too. I enjoy your blog a bunch...I'm glad your back. Hugs, Jennifer

This is the first time I've visited your blog. I didn't get further than the jury duty post. I can relate. I think I got called 6 times in 10 years and my husband wasn't called ONCE! I love your cursor. I'm a pomeranian nut, too. Our little Rascal is 1/2 pomeranian. I'll be back. Diane

I pretty much have a lifetime excuse...My fibermyalgia was so bad years ago that they gave me an excused absence. last time I was called...The letter said they have given up on me...and this will be their last contact with me! (YEA)
Good luck on your move!!!

I've had to be on standby before...call in every day for a week...and I had to go in one day and spend the morning...thankgoodness the attorneys settled the case and we got to go home...

Yes Sares I did miss you. I actually thought of you yesterday when I was mowing...yes mowing again...
Jury duty the thing most of us all dread. I have an excuse being in law enforcement they most likely will not pick me..at least I hope so.
Thank goodness it was a minor offense like you I don't need the serious stuff on my mind..bad enough I am dealing with two different murders now at work.
Please don't get me hooked on a game because I have an addictive personality ..lol...and I don't need on here anymore than I am now because if you could see how far behind I am with the house and mowing..hahaha
Glad you like it though.
Well I have better get going just wanted to say hello
Maggie

I bet that jury duty is exhausting. Glad it is over for now. Good luck on your biz. Hope the new location brings you lots of moolah!.....Christine

HI sweet girl, I was wondering where the heck you were. YUCK!!! Glad to see you are back with us. I can't believe you are on the move with your booth already, but it sounds like a much better spot to be in.
Hugs,
Debby

Aunt Amelia was here.
But do to her back hurting,
which limits her time on line,
she's leaving this simply Hello.

Just discovered your beautiful blog through the last Pink Saturday list. Love all the eye candy and wonderful photos. Plan to participate in this next event and will be listing your blog as one to definitely check out. Take care!
Val

Yes, we have missed you, but I haven't been on much lately either, been traveling home. Just arrived and getting settled in. Glad to see your "time" went well. This weird need to laugh when someone falls? Your cousin Jamie does that too...I think it must run in the family...

Bless your heart....I got summoned once and was excused becasue I worked with the arresting officer's wife! Guess they thought I might know too much! ha!
It is very interesting though!
Good luck with the move.

Glad I haven't been summoned for jury duty, don't think I'd enjoy it much.

I was wondering where you were off too. I thought you may have gotten stuck it Rich Arts yard! I'm a Canadian but I've still been called twice for jury duty and I have to remind them I am a Canadian...go figure!
I'm happy to hear you are on the move to downstairs Sares...That is a better location for sure. The shop is wonderful and perhaps you can capture the customer that comes in and out in a flash and never go upstairs. We'll be back in your area in July on the way to Portland again. Hope to see you then!

Well you can cross jury duty off your bucket list, ha ha! At least it was a somewhat interesting experience. I got lucky and got out of mine last year. Well not out, since I postponed it until the summer, then called in two days and they finally excused me. Whew! I think I was going to get something like $40 a day, though!

I was called 1 time for our State, but didn't have to serve (thank goodness).

Glad to hear that things are going well. Thanks so much for you kind words this morning. They mean a lot!

GLad to hear from you! I served on a jury once too...it can be interesting.
Micki

I've never,but my gal pal from work was called for duty...It was a serious trial it had left her feeling a bit weak after.
Very interesting though!!!